Tell the Supervisors: We Want Gun Background Checks at the Fairgrounds

During a surging pandemic, Crossroads of the West Gun Show returned to Pima County Fairgrounds last weekend. It brought together indoors hundreds of people, milling from tables of AR-15s, to shelves of revolvers, to racks of high capacity magazines and cases of AK-47s.

But the truth is that this show has never been safe for the residents of Pima County. Because unlike a licensed gun store, a great many of the weapons bought here require no background check.

It’s known as the Gun Show Loophole. Originally lawmakers intended it to cover “private sellers,” i.e., gun collectors and exchanges between family and friends. But at the Fairgrounds’ gun show, so-called “private sellers” act just like licensed gun dealers, selling elaborate arrays of semi-automatic weapons, except that they require no background checks. 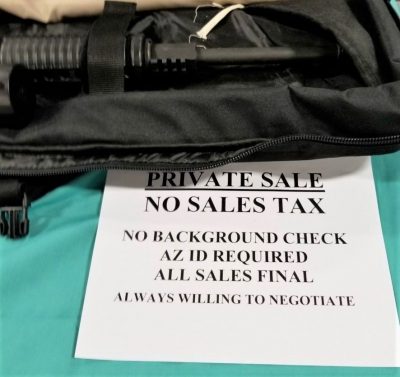 This is what worries TPD’s Chief Magnus: Gun shows are by far the best place in Pima County to get a deadly weapon for felons, gun runners, domestic abusers, people with a history of mental illness, and others prohibited by law from owning a firearm—no questions asked.

COVID-19 has been a threat for nine months. Gun violence has been an epidemic threat to public health in our country for decades. As we all pull together to end the pandemic, we need to do the same to end gun violence. For a decade now, all research and reason have made it clear that closing background check loopholes (including online sales) are essential if we want to keep guns out of the hands of criminals.

For the last several years, Citizens for a Safer Pima County (CSPC) has worked with the county and other like-minded groups to try and convince the Southwest Fair Commission to either require universal background checks at all gun shows, or to stop having events where illegal weapons are easily purchased on public property. To us, this seemed not just sensible, but a suggestion that could save lives. The Commission, however, has doggedly refused to protect the community.

According to numerous polls, between 80-90% of all Americans support universal background checks. In January, a newly elected Board of Supervisors will be sworn in. Not only does the majority support requiring background checks on all guns sold on county property, but the newly elected County Attorney and Sheriff also agree.

It will not be an easy lift, as the state has—since the tragedy at Marjory Stoneman High—passed laws that preempt counties and other jurisdictions from fully protecting their own citizens.

If you agree that guns should not be sold on public property without background checks, come January  6 at 9 am, after the supervisors are sworn in. Meanwhile, please call and let them know how you feel. (Call 520-724-8126, the switchboard for the Supervisors). Certainly, any laws that prevent local elected officials from protecting public safety need to be challenged.

It’s time for Pima County to do the right thing: Put public safety before special interest.

(If you’d like to be notified of CSPC action in the new year, please email your contact info to memckasson@gmail.com)

About the Author: Molly McKasson

Molly McKasson is the chair of Citizens for a Safer Pima County, which has been working to require background checks in private gun sales on public property (the Pima County Fairgrounds) during every Crossroads of the West gun show. Molly McKasson served on the Tucson City Council, representing Ward 6. She is a former teacher in Tucson.