Since 2003, refugees and Iskashitaa Refugee Network volunteers have worked together to harvest over a million pounds of produce from backyards, farms, and orchards, which is then donated to food banks, schools, soup kitchens, and hundreds of refugee families. By marrying these two challenges, we are able to break down the social isolation many refugees face, increase self-sufficiency and food security, and reduce Tucson’s food waste.

The network, made up of refugees, immigrants, and volunteers, is called Iskashitaa Refugee Network, which means “working cooperatively together” in Somali.

Dr. Barbara Eiswerth, Executive Director,  received her Ph.D. from the University of Arizona. She founded a community-based organization that creates opportunities to integrate immigrants into the Southern Arizona community while educating the public, strengthening the local food system, reducing local food waste, and increasing food security. 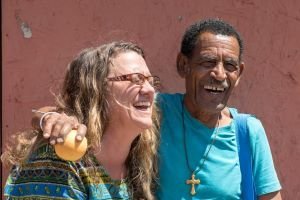 A sampling of the recognitions Eiswerth has received include being a National Finalist in Community for Sustainable Food, the Baha’i “Vision in Action Award”, National Garden Crusader Award for Feeding the Hungry, and the recipient of the Church Women United Nations Human Rights Award.

Eiswerth was awarded the distinguished Hon Kachina Volunteer Award in the State of Arizona, one of six recognized each year whose community volunteer efforts are making a difference and encouraging others to volunteer. Iskashitaa Refugee Network is being awarded the Libby and Meyer Marmis Humanitarian Award through the Jewish Federation of Southern Arizona.