President Donald Trump is waging a war on all current and future Social Security beneficiaries. Recently, Trump ordered the Internal Revenue Service (IRS) to defer the collection of payroll contributions. This was an unprecedented, unilateral action. When he announced his action, he also pledged to permanently “terminate” payroll contributions if he is reelected.

Social Security has a reputation of being the “third rail” of politics — try to cut it and you die. But is this still the case during a pandemic and resulting economic collapse, when voters have so much on their minds? Recent Data for Progress polling shows that the answer is unequivocally yes, even with all that’s going on, voters want to protect Social Security.

The poll they conducted listed over a dozen major issues, and asked voters to pick the three that they considered most important and the three they considered least important. “Preventing Social Security benefits from being cut” was the only issue ranked in the top three by over half of voters, including 51 percent of Republicans, 54 percent of Democrats, and 57 percent of Independents. No other issue polled received anything close to that level of bipartisan support.

Furthermore, even those who didn’t rank preventing Social Security cuts in their top three still considered it a relatively high priority. Only 6 percent of voters ranked it as one of their three lowest priority issues.

The reason for the unanimity is not hard to understand. Social Security works. It provides basic economic protection for all who are dependent on wages — which is just about everyone. Having just celebrated its 85th birthday, Social Security has stood the test of time. It is a guaranteed source of income that cannot be outlived, backed by the full faith and credit of the United States. Indeed, more than 3 out of 5 retirees receive most of their income from Social Security. It is generally the only disability insurance that working families have and their most important life insurance. 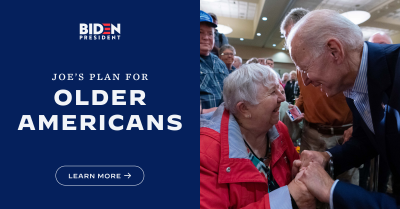 The Democratic Party’s presidential ticket of Joe Biden and Kamala Harris understand this. Harris, still several days away from being selected as Biden’s running mate, was one of the first political leaders to react to Trump’s statements with a scorching tweet: “Trump just promised that if he wins reelection he’ll gut Social Security and Medicare. A vote for @JoeBiden in November means protecting and expanding these benefits—ensuring our seniors have the ability to retire with dignity.”

Biden himself has promoted the same message, and not just on Twitter. He is running an ad in Florida calling out Trump’s plan to defund Social Security, and wrote an op-ed in the Tampa Bay Times. Most importantly, he brought up Trump’s attack on Social Security during his DNC acceptance speech. With millions of eyes upon him, Biden pledged that “we’re going to protect Social Security and Medicare…you have my word.”

Yet while messaging from the Biden and Harris campaign reflects the priorities of voters, the same can’t be said for the media. Cable news, in particular, has reacted to Trump’s promise to defund and ultimately destroy Social Security with a collective yawn.

While there are many important topics to cover, voters are clear that protecting Social Security is one that they care about immensely. The media should listen — and respond by giving Donald Trump’s promise to destroy Social Security if he is reelected the attention it deserves.

About the Author: Nancy Altman