On his way to a school assembly where he teaches, City Councilman Paul Cunningham of Ward 2 discussed annexation, water, and the downtown Pancho Villa statue at the Democrats of Greater Tucson meeting on June 14, 2021.

He reported that Tucson is “in good shape” when it comes to water supply, despite the Megadrought. Lake Mead, which is the city’s water source, is at an all-time low.

Cunningham strongly supports differential water rates — raising water rates by $4 to $7 per month for suburban customers who live outside the city limits. He said 42% of water infrastructure is in unincorporated Pima County, and Tucson has no authority to require water conservation or share the risk when water bonds are issued.

The city had to shut down six different wells because they are polluted with a plume of toxic PFAs chemicals near the airport.

“I would like to see Vail, the Catalina Foothills, and Green Valley all incorporate,” he said. Currently, he said the city is “trading annexation for zoning,” meaning that developers are seeking zoning to allow them to build denser subdivisions in exchange for agreeing to have their property annexed into the city. He said developers come to the city “saying we’ll annex in if we get an up-zone. We don’t really want to do that. We want them to get an up-zoning inside the city,” he said. 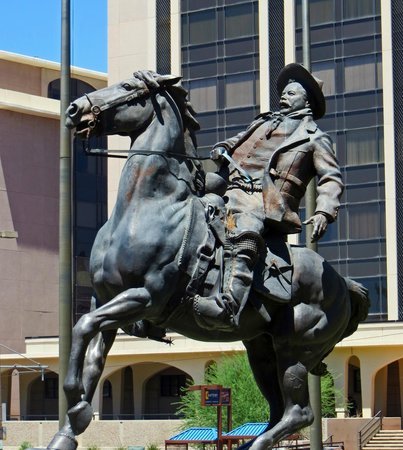 “This is a sprawl-stopper,” he said.

A question was raised as to why the city is paying homage to Pancho Villa, a Mexican revolutionary who murdered Americans. Villa executed 17 U.S. citizens at Santa Isabel, Chihuahua, in January 1916 and two months later attacked Columbus, New Mexico, killing about 17 Americans.

“If you study the history, that guy wasn’t a freedom fighter, he was more of a gangster,” Cunningham said. “It’s probably not the statue we want, but there’s some social sensitivity to that. What I’d like to see if we can figure out a way to replace that statue with someone a little more prominent, but who also reflects that cultural sensitivity.”