President Trump announced four executive actions, including a temporary payroll tax cut. While illegal, they are also a backhanded way to defund Social Security and Medicare. The president’s understanding of the reason for payroll deductions is in itself puzzling, or he understood it perfectly well, and his real intention is another try at defunding Social Security and Medicare.  Temporarily eliminating the payroll tax and ignoring Congress’ power of the purse on funding unemployment insurance will do nothing to help Americans recover from the coronavirus.

But what it will do is withhold funds needed to fund our Federal Government, our State Governments and Social Security and Medicare.  Sen. Ron Wyden (Dem. Oregon), who sits on the Senate Finance Committee, pointed out “that these workers will be hit with much bigger tax payments at the end of the year.” Because the president can’t cut taxes on his own, taxes due are only being delayed. If the president gets his way, millions of Americans are going to be in a great deal of hurt when their last paycheck for the year reads ZERO — because their employer took out all their federal, state, and social security.

With a projected $3.7 trillion deficit for the year makes one wonder perhaps if Democrats really know what’s coming if they win in November?  By withholding future tax payments, the president is increasing the national debt and come inauguration day Republicans are going to have an epiphany for spending cuts (read social services) or in Republican speak “Starve The Beast.”

Arizona is not going to be immune if payroll taxes are withheld either. Because of Arizona’s over-reliance on sales taxes and the effect the coronavirus has had on sales and the withholding of taxes due is going to be more of a strain on our state budget.  More strain on the budget, less school revenue. In Arizona, we are going to face the same problem. Republicans will have two choices: raise the sales tax or do the unthinkable and raise state income taxes. 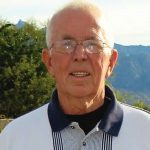 Clyde Steele of Oro Valley focuses on financial affairs, taxation, and reading more than 90 books a year, mostly about history, current affairs, and monetary policies — with special emphasis on the meltdown for 2008 & 2009. He has done extensive research on gerrymandering and Ronald Reagan’s tax policies.