The Damage from an Incompetent, Devious, and Ambitious President

Commander Covid created the current period of uncertainty with his inability to understand that he lost the election and his desperate attempts to torque the outcome to his favor. In contrast, President-elect Joe Biden wishes to let bygones be bygones and “move forward” in the country’s interests, unbound from partisan interests. I may overstate his benevolence toward the opposition, but I believe this is a dangerous approach if not moderated by reality.

Over the past four years, Commander Covid and his minions have tried to manage the government, reward their friends, punish their enemies, and look after their personal financial and emotional interests at the same time. As a result, a multitude of irregularities, missteps, and bumbles far too many to be listed here have ensued. Some of these actions have broken “norms,” and perhaps many have, in fact, violated the law.

Our democracy is built on assumptions about how it would work in the people’s best interests and the country. These assumptions include the division of powers between the three major branches of our government,  and a set of checks and balances. When these principles are used responsibly by responsible leaders in each branch — some elected and some appointed to their positions — our government works reasonably well. This system of representative democracy is, to some extent, replicated by the states and by most local governments as well.

For four years, we have been enduring a continuing assault of these principles by an incompetent, devious, and ambitious president whose dishonesty has been protected and nurtured by Republicans in Congress, state governments, and the Judicial branch. The damage resulting from operating governments in this manner has been incalculable to our people, our governments, our economy, our relationships with friends and adversaries around the world, and even our very health. More’s the pity that almost half of our fellow citizens don’t recognize the extent of the damage, don’t understand what it’s costing them personally, or don’t understand what’s causing it!

What I am getting to is that the damages are significant, and the lack of consensus about what has caused these damages is dangerous. We need to seriously examine and openly discuss these damages, assess responsibility, and hold those responsible accountable. Perhaps this situation calls for a truly and scrupulously nonpartisan truth and reconciliation commission.

It is clear that laws have been broken, and blame can be assigned. Those responsible should be exposed to our statutes’ civil and criminal consequences. As Gilbert and Sullivan’s Lord High Executioner says, “let the punishment fit the crime.” It is clear that “norms,” important to the functioning of our representative democracy, have been tattered. We should consider whether or not the so-called norms need to be codified in law or regulation to prevent such damage in the future.

Here’s an example. We have heard a lot about violations of the Hatch Act by Commander Covid’s administration. The Hatch Act is supposed to keep the federal government’s facilities, resources, and employees (yes, even the Commander is our employee) from being used or engaged in partisan political activities and purposes.

For employees such as the President and members of Congress, it’s a tough line to draw, but it has been drawn. That’s why members of Congress are supposed to leave their offices to make calls to donors from some other location other than the halls of Congress. That’s why presidents are not to give speeches to political conventions meeting on the South lawn of the White House.

For 25 years, I was subject to the constrictions of the Hatch Act as a government employee. Although I could voluntarily donate to political parties or candidates, I couldn’t do it at the office. I could not canvass my neighborhood for a candidate. I could not actively participate in partisan activities. 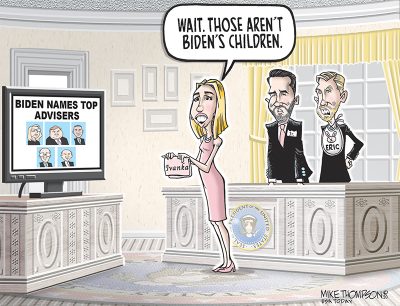 Penalties for violating the Hatch act were largely administrative. I could lose my job, get demoted, or be fined. But these penalties were carried out by my agency, not by a federal district court. Certainly, if you were interested in a career, the penalties were a sufficient deterrent. Obviously, they don’t work now when your superior is the president. Trump’s partisan act was to his daughter’s reputation as a fashion maven on the White House grounds. Ask Kellyanne Conway.

Who will call out the chief executive when he holds overtly partisan events at the White House? These are both norm-busters and civil violations of a federal statute. But who’s going to call them to account in either the legislative or executive branches for these violations? In the light of the Commander’s norm-busting and law-breaking behavior, do we need some kind of adjustment of the Hatch Act’s penalties section?

To conclude, I appreciate the President-Elect’s desire to avoid getting involved in partisan recriminations, which might hamper his ability to achieve his ambitious efforts to rebuild the nation’s health and economy. But indeed, if serious crimes have been committed by the Commander or his minions, they need to be held accountable. It will be a lesson to themselves that their offices or responsibilities did not put them above the law. It will be a signal to future politicians who believe that government office is a license to steal or break the law.

What the President-elect must do is to appoint an attorney general who is tough as nails and willing to enforce the laws without fear or favor. Then he should get out of her way. State courts should be willing to enforce any past or current violations of their laws by former federal officials without interference by federal officers. In this way, either federal law or state law can proceed to hold the right people to account while our new president can continue to be Mr. Nice Guy, for what it’s worth to the congressional opposition.