Trump gangs including the Proud Boys, the Oath Keepers, the Three Percenters, and other right-wing militias are accosting and menacing elected state legislators, causing them to fear for their safety. Here, State Senator Victoria Steele, D-LD9, recounts several incidents.

Speaking at the Democrats of Greater Tucson meeting on Dec. 14, 2020, Sen. Steele reported that she:

As a result, Steele had the Arizona Department of Public Safety initiate an investigation into the assaulters and had to call in the Pima County Sheriff to protect her home.

Members of the Arizona electoral college had to meet in an undisclosed location to keep them safe from Trump gangs at the state capitol on Dec. 14. “Meanwhile Protestors, some of them probably armed, had about 20 people at the mall between the House and the Senate. We’re glad we took the precautions,” she said.

The same day the Michigan House and Senate closed their offices in downtown Lansing as presidential electors met, citing “safety and security concerns.”

“They are desperate to overturn the 2020 election and we have not heard the last from them. They are using innuendo, intimidation and they are present. When you are around these folks you definitely don’t feel safe,” Steele said. 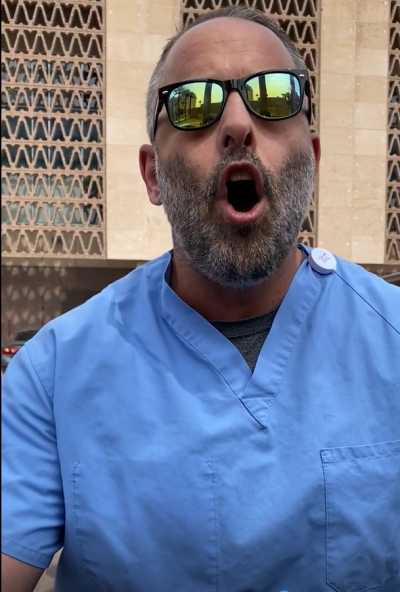 Ambushed at the capitol

She said she was ambushed in the parking lot of Senate in early May when we decided to adjourn the session. “There was a man there in nurse’s scrubs. He was really in my face. He got to several legislators as we were trying to get into our cars. He backed me into a corner and started yelling at me, telling me I didn’t need that mask, refusing to move back. He was in my face. I held up my video camera and videotaped the whole thing, because they were videotaping me. This is not OK and I’m not backing down.”

“I got threatening calls, all day and all night,” she said. “I got about 700 emails from people telling me that I need to do my job, swearing at me, saying there’s obviously fraud and I need to overturn the election. It’s been nuts.”

After I put my video online, I started getting calls from the “Patriots,” telling me that he’s one of us, you don’t know dangerous if you don’t take that video down, you’re going to know what danger is,” Steele reported.

“Then I started getting stalked, basically. Someone rang my doorbell and ran after dark. That has never happened in the entire time I’ve lived there.”