Arizonans Still Must Demonstrate for Public Schools to be Fully Funded 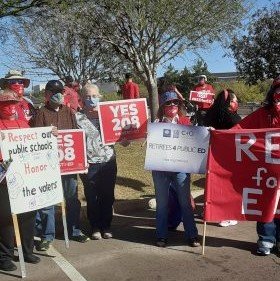 This photo was not taken during the Invest in Ed rallies last year. ►

Neither was this one.▼ 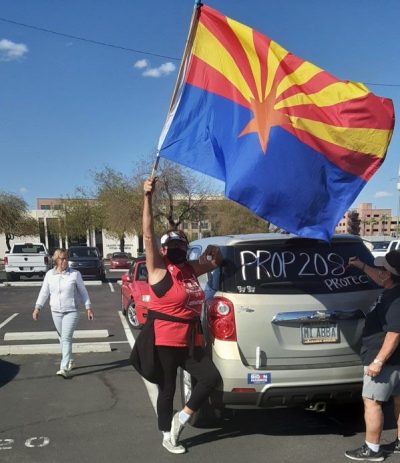 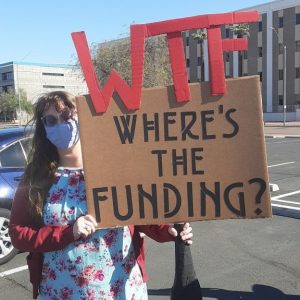 These photos and the featured one were all taken on Wednesday, March 10, 2021, as Arizona citizens chanted “Red for Ed” and circled around the State Capitol numerous times protesting Republican Legislators’ attempts to “undermine the will of the voters,” as Arizona Education Association (A.E.A.) President Joe Thomas put it.

GOP legislators have passed bills that would circumvent Invest in Ed/Proposition 208 funding (SB1783) and expand school vouchers (SB1485) which the voters rejected two years ago. Only last November, 1.7 million voters voted for Proposition 208.

This should not be happening in 2021.

This anti-public school agenda has been soundly rejected by pro-public school education Democratic Legislators and organizations like Save Our Schools and Stand for Children Arizona. 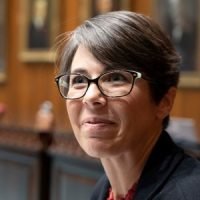 Before driving around the State Capitol Event, Legislative Districts 17 and 29 State Representatives Jennifer Pawlik and Richard Andrade released statements protesting the Republican Legislators’ attempts to circumvent the will of the people.

“After many attacks on public education, educators from all over the state have learned that the best way to have their voices heard is by showing up and engaging with elected officials. I am committed to opposing the bills that privatize education and those that further impact funding of our public-school systems.”

“I stand in solidarity with our educators and as a union member. Our concerns are for the safety of educators, students, and our communities. Our educators deserve the respect and dignity to teach without the fear of COVID-19 and have fought hard to bring funding to our public schools, with the passage of Proposition 208.” 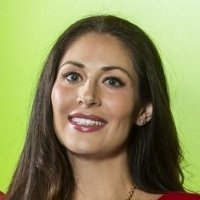 Dawn Penich-Thacker of Save Our Schools Arizona.

Dawn Penich-Thacker, the Communications Director for Save Our Schools Arizona, relayed:

“People are incredibly frustrated at some lawmakers not just ignoring us but actively undermining our wishes and so they are taking time out of their day to insist again that politicians fund our public schools and stop expanding these irresponsible voucher schemes.”

Ms. Penich-Thacker also indicated that her organization is willing to go back to the courts or ballot box to stop voucher expansion.

The head of Stand for Children, Rebecca Gau, is also prepared to have more demonstrations and go to the courts and the ballot box to stop Republican attempts to cut off the funding mechanisms for Proposition 208. 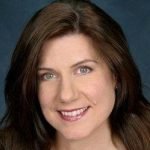 Rebecca Gau is the Executive Director of Stand for Children Arizona.

Saying she “had hoped we wouldn’t have to do this again,” Ms. Gau relayed that her organization became aware after the November elections that Republicans would try to enact sneaky legislation to get around Invest in Ed.

With the release of J.D. Mesnard’s SB1783, the measure that carves out a way for wealthy individuals to declare themselves a small business, Ms. Gau and her allies’ worries were realized.

Saying “we are in bizarro world,” Ms. Gau vowed to take the message to the voters that Republicans are working to undermine the will of the voters.

She hopes that once Republican legislators and Governor Ducey see the negative reaction from the people (and their prospects for reelection or higher office dwindle,) they will “come to their senses” and stop these attempts to turn back the clock on the voter-passed education initiatives.

What is it about the phrase “the people have spoken” that Republican legislators do not seem to understand?

As Republicans in Arizona are doing everything in their power to suppress Democracy and undermine voters who said no to voucher expansion and yes to more funding for public schools, citizens need to raise the decibel levels again and tell them no more.

No more tax cuts and private school voucher breaks for the rich.

No more voting for candidates that do not serve the people of Arizona.