This is a call to Arizonans to support Democrats Raphael Warnock and John Ossof for US Senate from Georgia.

The best place to donate is  the Georgia Democratic Party at:
https://secure.actblue.com/contribute/page/52316

The balance of power in the US Senate is still undetermined. The US Senate is now down to 50 Republicans to 48 Democrats, with two remaining Senate seats in Georgia going to a run-off on January 5th.

Democrats will need to win both Georgia seats to bring control of the US Senate to 50-50. When votes are tied in the Senate, the Vice President, who is also President of the Senate, casts the deciding vote.

Under that scenario, Democrats would formally control the upper chamber, including the Committee chairmanships.

Democratic hopes of taking both Senate seats are buoyed by the fact that Biden is the first Democratic presidential candidate to carry Georgia since Bill Clinton in 1992.

Georgia has two US Senate seats up in 2020. The first is the regular election up for incumbent Republican David Perdue, and the second is the special election to fill the remaining term of Republican Johnny Isakson, who left the Senate in December of 2019 due to health issues.

Both now go to a runoff on Tuesday, January 5th.

Georgia’s junior Senator, David Perdue, was first elected in 2014 with 52.89% of the vote. A former businessman, and cousin of former Trump Secretary of Agriculture Sonny Perdue (R), he served as CEO of Reebok, Dollar General, and Pillowtex.

Perdue is being challenged by investigative journalist Jon Ossoff, who first drew national attention in a high-profile, but unsuccessful, April 2017 Special Congressional Election. 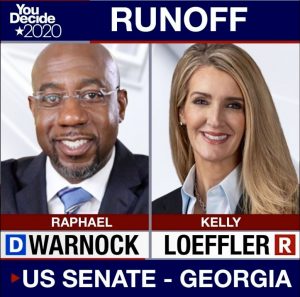 That election centered on the bitter battle between Loeffler and outspoken Congressman Doug Collins, who helped lead the fight against the President’s impeachment in the House, and who challenged Loeffler against the wishes of the Senate GOP establishment.

In the interim, Democratic candidate and Atlanta Ebenezer Baptist Church Reverend Raphael Warnock surged past the two, with a roughly 344,000 vote lead over Loeffler, who will now face him in the runoff.

All this sets the stage for what can be expected to be the most expensive Senate race in history, with both parties and outside groups already pouring in millions of dollars, and dispatching virtually thousands of field operatives to the small southern state.