You may recall the president’s (AKA Commander Covid) fevered rant a few weeks ago about “the ballots” being rife with corruption, stolen votes, imaginary voters, and other outrages. He fabricates that they are all perpetrated by sinister Democratic sympathizers including, of course, Black Lives Matter and Antifa.

Well, it seems like the abuse and corruption didn’t amount to too much beyond some misplaced absentee ballots in one county in central Pennsylvania that was an honest mistake easily corrected.

But the commander’s “ballots” rants continue to roil on through:

(A shout-out to early in-person voters who are enduring long lines and all kinds of weather to cast your votes. You are making a difference!).

All these “ballots” will indeed make a difference, provided that election workers will be allowed to do an honest and transparent job of counting all legal votes without partisan interference. 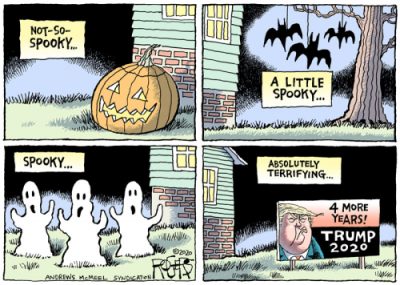 Democrats should be wary of the data generated by public opinion polling after the 2016 elections and earlier elections going back to the earliest days of opinion polling, where the polls did not give an accurate picture of the actual result.

However, the consensus of polling data seems to indicate that we voters appear to have had enough of Commander Covid’s incompetent, immoral and illegal style of governing. Voters realize the real damage it has done to our democracy and are voting for a change from city halls and county courthouses, state capitals, and the elected branches of our national government.

So, what do we do as we head toward November 3?

First, don’t let up. Get all the votes we can find. Votes that were not cast can never be counted, and every vote counts. Start with family and friends and work outward to encourage folks you know to cast their votes. We voted our early mail-in ballots and then followed up at the County Recorder’s Office web site to make sure our ballots were received, validated and ready to be counted.

Next, prepare to wait a while for a result. As the voting proceeds, available information suggests a massive vote-counting task awaits election officials once the in-person voting is complete on November 3.

We should be used to this. In the few elections I have experienced in Arizona, early results reported within the first few hours are rarely definitive due to extensive early voting. This situation will be multiplied across the nation as the use of voting by mail and early in-person voting has increased significantly.

In fact, the Pima County Recorder reports that almost 150,000 votes have been cast by October 20. This is more than 29% of all early ballots sent out, with almost three weeks to go. A significant percentage of votes cast in Pima County will likely be by early ballots.

Statewide, approximately 928,000 mail-in ballots have been received. Early in-person voting is about to start. The nationwide statistics are also amazing. Reporting from the U.S. Elections Project counts more than 56.5 million votes already cast by October 24, by mail-in ballots or by early in-person voting. A ray of sunshine for reporting results is that Recorders here in Arizona may begin tabulating ballots now and hold results until the polls close on November 3, which may speed up reporting of results.

Finally, be vigilant. It will be a good time to be skeptical of what you hear and read about goings-on as we await results. Battalions of lawyers from both sides will be waiting to jump on irregularities – both real and imagined. Breathless news outlets will be looking for news from any source. If you are dying to see the real thing, the Pima County recorder’s website is live streaming video from three locations in the ballot-counting center. Have a look: http://web1.pima.gov/elections/livefeed/

On a related note: a couple of weeks ago, I suggested that uniformed law enforcement officers should be kept away from polling places to avoid an appearance of intimidation. Apparently, Mayor Romero got wind of my suggestion, and worked out a plan with the City Manager to keep uniformed TPD officers from being placed at city polling places while they are off-duty by an independent security service hired by the Recorder. Instead, on-duty patrol officers will frequent polling places, and be ready to respond quickly if situations of real intimidation by unofficial “poll watchers” arise.

The Recorder is not happy and is concerned for the safety of poll workers and certified observers. I suggest there may be viable alternatives to having uniformed (and I assume armed) law enforcement at the polls constantly. Perhaps Her Honor and the Recorder should have a cup of coffee together, and find some middle ground.