The Assault on Election that Refuses to Die

Commander Covid seems to be retreating to the next ditch in his losing battle to hold on to an office he does not know how to fill. It appears that his battles to get recounts and to have perfectly legal votes cast by perfectly legal voters in a mostly secure election had gotten him and his minions nowhere in both state and federal courts.

It’s been so bad for him that even solidly Trumpkin officials in two of “his” states, Arizona and Georgia, have followed the only course open to them — the legal course — and certified the returns as proper and accurate. 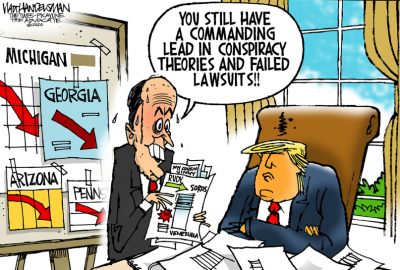 I was proud of our Governor when, as he was preparing to sign the certification papers, his mobile phone started playing “Hail to the Chief,” indicating a call from the White House. He took it out, looked at it, and turned it off, placing it symbolically face-down on the table.

The next tactic will ask have partisan legislators in several states to reject election results as somehow fraudulent and invalid. The far-fetched rationale is that the constitution grants state legislatures the authority to select electors who would ignore the state’s popular vote results and vote for the Commander on December 14. This possibility should keep us awake at night until the Electoral College does its duty on that day two weeks from now.

This wild-eyed tactic will surely fail, just like the poorly prepared, evidence-free arguments in the first ditch got nowhere in various state and federal courtrooms. In the meantime, this tactic allows dyed-in-the-wool Trumpkin legislators to embarrass themselves before their constituents by having meetings that look like official legislative hearings, appearing to seriously consider this tactic in response to unproven claims of serious voting irregularities.

This is an outlandish and seriously undemocratic attempt to allow the Commander to keep his grip on a presidency, for which he is clearly not interested in doing anything constructive.

Rep. Mark Finchem (R-Dist. 11) of Oro Valley and other participating legislators should be held accountable for their disruptive behavior by their constituents at the ballot box and by their legislative colleagues.

This last-ditch fight is also in question because of the incompetence and behavior of his so-called “legal team.” The team gives the competence and ethics of the lawyers for Trump a bad name. Be sure to read Bar Complaint Filed Against Attorneys in Frivolous AZ GOP Lawsuits.

The likes of “America’s [former] Mayor,” conspiracy theorist, Hugo Chavez whisperer Sidney Powell, and most recently “Joey the finger man” Genova do not appear to be deft and knowledgeable practitioners of the law. But they are all who’s left since Jones Day and other reputable firms have pulled partners and associates out of the fray. This is not just to protect the firms’ reputations. Their withdrawal came because it appears that further pursuit of overturning the elections due to widespread fraud and misbehavior is impossible to prove.

Finally, Commander Covid has once more proven that he will turn on fellow Republicans — if lawfully doing their jobs puts them at odds with his personal goal. Furthermore, he demonstrates once more his total ignorance of how government works in a democracy. If, however, he does have a glimmer, he is consciously subverting our democracy. Both of these possibilities should disqualify him, if he chooses — perish the thought — to run again in 2024.