He spoke at the April 26, 2021, meeting of Democrats of Greater Tucson.

“I support either B or C. Both got the highest number of votes. Both preserve our 4-year-old contract commitments, and both do not increase the cost beyond our ability to pull it off. Option G has up to a $25M added cost. Think of the parks improvements we could do with that money,” he said.

A majority of people living next to Reid Park favor Option G, an expansion to the north that includes building the parking garage, taking over the city’s Therapeutic Recreation Center and two large communication towers. The Tucson City Council will make a final decision on Tuesday, May 4.

Kozachik emphasized that the expansion of the Zoo must go forward because the city has already spent $2 million on it, and signed contracts three years ago with construction companies and the Zoological Society. “This is a credibility issue,” he said. “Can the City of Tucson be counted on to stand by contracts they signed? That answer has to be ‘yes.'” 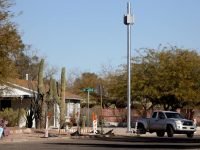 An unsightly 5G pole in the front yard of a home on Sycamore Street.

Kozachik is working to prevent ugly 5G wireless towers from being built in homeowners’ front yards. The poles are 35 feet tall and the city has no control over where they are located.

He is in talks with Verizon, AT&T, and Tucson Electric Power to locate the poles atop traffic lights, utility poles, and in alleys behind houses.

Kozachik supports scholarships for pre-school education. He is working with fellow supporter, Penelope Jacks, chair of Strong Start, and with opponents in the Southern Arizona Leadership Council, to re-present the idea. In 2017, voters rejected a measure to increase the city sales tax by a half-penny to pay for preschool vouchers.

Kozachik, who spends 10 hours a day, 7 days a week, on his city council duties,  is not taking any donations for his run for city council, in a personal move to get money out of politics. His many accomplishments include: