Chris Nanos would like a second shot at serving as the Pima County Sheriff Position.

Appointed in 2015 to complete the term of retiring Sheriff Clarence Dupnik, Nanos, a man with decades of law enforcement and executive management experience, became engulfed in an F.B.I. investigation of the department thanks to questionable acts by two leading deputies before his taking the position.

No charges were filed against Nanos but the albatross of the investigation created an electoral opportunity for Republican Mark Napier to win in 2016 what he lost in 2012.

Now four years later the Pima County Deputy Sheriff’s Association that supported Napier has asked him, after years of broken promises and accusations of harassment, not to run again, actually passing a motion of no confidence in him.

Other anonymous employees of the Sheriff’s Department paid for a billboard on 1750 East Benson highway with Nanos picture asking him to come back.

On December 17, 2019, Nanos, after discussing the situation with his wife, declared that he would run to take back his Sheriff position in the 2020 elections.

This article was reprinted from the Blog For Arizona. Visit https://blogforarizona.net/ for the inside story about local politics.

Sheriff Nanos graciously took the time to sit for a phone interview to discuss his reasons for running again and goals for the Pima County Sheriffs Office if he wins the election in 2020. The questions and his responses are below.

“I’ve been in law enforcement for 41 years. I started out as a cop in EI Paso where I worked as a street cop for over nine years. I come from a large family of ten kids and was raised by my mom who was a single parent. I met my wife through her dad and I moved to Tucson in 1983 and joined the Pima County Sheriff’s Department as a Corrections Officer in 1984. I later became a Deputy and worked various assignments. I worked in homicide, narcotics, sex crimes, and child abuse. I worked my way from the ground floor and rose through the ranks, where I was blessed enough to get all the way to the top. I am the only one in the history of the department that has worn every single badge in this department. I understand every aspect of the office.”

“Although I was never an object of their investigation (The F.B.I. Investigation), I take full responsibility for the mess laid before me. However, I was not given the full opportunity to clean it up. I found out about the investigation 15 days after becoming Sheriff. I had to keep quiet about it but I certainly could have handled the press better. I fully cooperated with the investigators. I could not believe people I had known for 30 years were involved. They never shared their findings until December 2016, well after the election. The new sheriff, who was given the opportunity to clean things up, made matters only worse and promoted chiefs that were involved with the F.B.I. problems. He was told of their involvement and he still promoted them. This place was a mess before I got the job. I would like the same opportunity the current sheriff had, an opportunity I never had, the chance to clean things up.”

“The second reason, and probably the main reason I want to come back is that people at the Department who supported my opponent in 2016 called me and said, “this is not the change they wanted.” The Union leadership and other employees have now expressed support for my running again. These associations, that had fully endorsed him, had given Napier a vote of no confidence because he does not listen, does not accept responsibility, and does not learn. He had said he would not run again if people were not happy with him and he broke his word on that. There was a billboard that said we want Nanos back from people in the Sheriff’s department (right across from it.) I saw it as a sign as an anonymous message from the department that they want him back.”

“I know the people and they know me. They know my character and what kind of leader I am. Mark made 26 promises in writing. The only promise I will make is that I will do my job and do everything I can to make you successful in your job. We need to heal and provide this community with great public safety. Mark (Napier) did not do that. He further divided the team. Something I will never do,  for to me they’re family.” 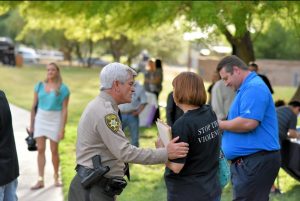 Please list what is at least your three most important achievements as Sheriff?

Please explain what are two areas that you would like to improve on if reelected Sheriff.

A) “You have to serve the community and find innovative ways to reduce crime.”

B) “You need to serve your team and make sure they have the tools and support to get the job done.”

A) “My experience with 20 years as a street cop and 20 years as an executive manager. This helps you with problem solving, morale, and retaining talent as opposed to having a job exodus. Staffing levels are at an all-time low and this has a direct impact on morale and the work environment. I have faced these problems before and was always successful in resolving them.”

B) “Mark has said he sees himself as a political figurehead and the people under him would handle the office. I believe in humility and leading by example while being receptive to ideas from all sides. If you want someone to appear on Fox News with an eye towards national politics, then Mark is your guy. If you want someone who wants to serve the community and his team, I’m your man.”

“We need to rekindle outreach community programs to our neighborhoods from the department.”

“I would work with other agencies to find alternatives to solve society’s ills. We have to constantly be looking for ways to be doing things better with local partners. We should be evaluating existing programs to improve them for the betterment of the community like people suffering from mental illness or substance abuse that need treatment, not imprisonment.”

“I would like them to know that I just believe people out there today are not as bad as we sometimes think. We as people should try to help those who have been dealt a bad hand through no fault of their own second chances. We should not politicize the suffering of others. We need civility in our discourse and we need to find a middle ground. I am a glass half full person. I also volunteer for an organization called Youth on Their Own that helps homeless children (about 2700) by giving them stipends for bus passes, food, and clothes. The struggles of others can be overcome.”

“Chief Napier has more bullying complaints than anyone in the office. A private investigation revealed there was bullying. Napier said this is all political theater.”

“The PCSD faces many challenges, but nothing as immediate and severe as the challenge of morale and the impact it has on retention.”

“The past four years of gaining compliance through threats and intimidation has had a huge impact on the culture of the department and its work environment. Trust issues have become so big that more and more members are secretly tape recording one another.  Competitive promotional processes have all but been eliminated, having now been replaced with appointments and direct interviews with the Sheriff.  Purging of political enemies and cronyism has become such the norm, there is no dissent…informed or otherwise.”

“Turnover is at an all-time high and morale is at an all-time low.  There is a huge void in leadership and employees who have been hiding in the shadows are just now starting to come out.  We’re just now starting to hear of the lies that have been told.  With FBI investigations of potential civil rights violations and abuses by the Sheriff and his executive command staff that require the need of a “special master” unfolding, it’s only a matter of time before we hear more of their corrupt ways.”

“Karma is an interesting noun, for the truth always seems to find its way to the top.  For these aren’t really challenges in as much as they’re sins of the past catching up with those who chose to deceive and placed their own self-interests ahead of all others.”

“Thus the path forward is quite simple, lead…lead by example.  Be willing to acknowledge your mistakes.  Listen and learn.  Have some introspect and be humble.  Know that you are never the smartest one in the room, and understand good ideas can come from both sides.  Always treat others with respect, and when disciplining, leave them with their dignity.  Be kind, be compassionate. It’s all pretty simple…do what your mother always said…do the right thing!”

“I’ve dealt with these issues before and have the experience and skills needed to get us back on the right track.”