Millions of Americans are counting on the USPS Governing Board to use their authority to replace Louis Dejoy as Postmaster General.  In the military, no one rises to the rank of general without deep knowledge and understanding of the job—and the wisdom to anticipate the consequences of actions being considered.  It is this wisdom that minimizes the likelihood of unintended consequences.  We cannot eliminate the possibility of unintended consequences totally, but we should do whatever we can to minimize them, especially in cases where the consequences have the potential to do so much harm.

One arena where we continue to make such mistakes is in political appointments.  It is clear that Dejoy does not understand, appreciate or value the role the USPS plays in the lives of millions of Americans who depend on timely postal delivery for their financial security, their health security, and something as fundamental as preserving the rights of Americans to choose how to cast their ballots safely in our electoral process.

In the latter regard, I am particularly concerned about the upcoming election.  I volunteered at the polls this month in Pima County, which has a mandatory mask requirement.  I can tell you that there were many people who came to cast their ballots who refused to wear the masks that were provided.  They also refused to vote outside using the accommodation developed to secure their voting rights and safety concerns while also securing the safety concerns of others who did wear masks.  This is likely to be an even greater problem in November when we have greater numbers of voters.  Voters need to be allowed to vote by mail.

I appeal to the Board because they are all successful business people.  Would any of them hire an executive in their own company who lacks the prerequisite knowledge and experience to be successful?  That’s a rhetorical question, because I know the Board members did not rise to the top of their own professions without good judgment. The governing board of the USPS to use that judgment. The USPS Board must immediately replace Dejoy with someone who does possess the knowledge, skills, and experience to do this very important job.

What you can do

Call and email the list of the 6 USPS Governing Board members with email addresses and phone numbers. 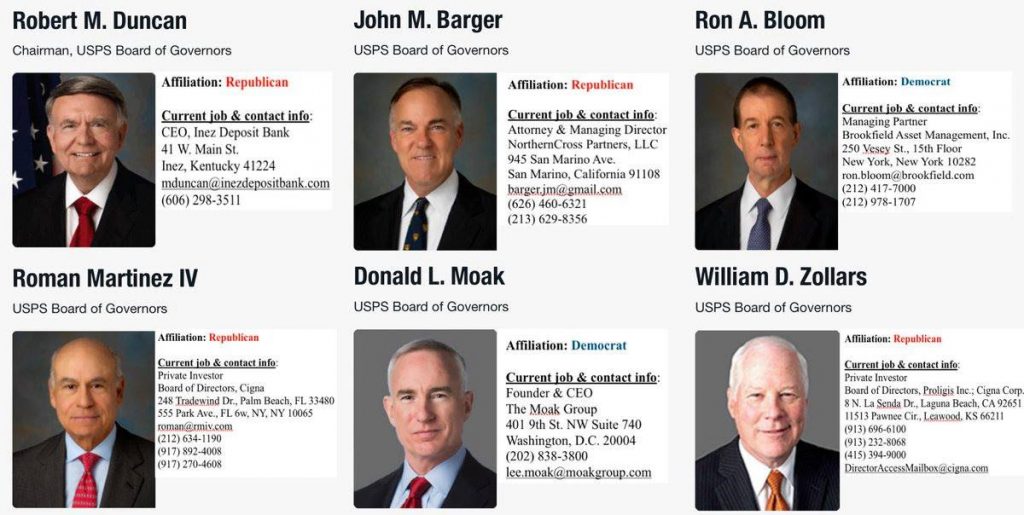 The future of the Postal service and perhaps our democracy are in peril. The actions of Director DeJoy are a blatant attempt to undermine our country’s citizens the right to a free and fair election. I urge you to take action to counter these measures and reestablish the integrity of the USPS.

Not only is the Director trying to sabotage the vote he is creating an unnecessary burden on our Senior Citizens, Veterans, and residents in rural areas who rely on the postal service for medicine, Social Security, and other monetary assistance. The time to act is now! Any further delay could be catastrophic.

You can go to this link and file a complaint with the Inspector General: https://www.uspsoig.gov/form/file-online-complain

Feel free to forward this to any of your friends.

Lynn Hudson is a retired academic who lives in Tucson. She has been a poll worker during the last three elections.

About the Author: Lynne Hudson

Lynn Hudson is a retired academic who lives in Tucson. She has been a poll worker during the last three elections.