Republicans have spent weeks and employed multiple levels of parliamentary procedures to ram Senator Nancy Barto’s fetal personhood bill through both houses … twice. SB1457 died in the Senate earlier in April, but the Republicans brought the zombie bill back to life for a do-over.

This article first appeared on the Blog for Arizona with the headline, “#AZLeg​ Vote Protects Fetuses, Criminalizes Doctors & Patients.“

Government has the right and the duty to make and implement public health policy to keep us all safe and healthy — like mask mandates, vaccinations, inspections, etc. The government does not have the right to insert itself into personal medical decisions and impose felony charges against medical personnel and patients to enforce the Legislature’s will.

SB1457 criminalizes the doctor/patient relationship if they discuss, recommend, refer or perform an abortion on a woman and they all know she is carrying a child with a disability or a child that is so medically fragile that it won’t live long after birth. It also makes ordering abortion-inducing drugs by mail illegal.

Besides the fact that government should not be meddling in this personally tragic decision, the woman and her partner have to think long-term about raising a child with a severe disability or carrying a fetus to term that may not live 24 hours. This is a tough decision — emotionally, physically, and financially. 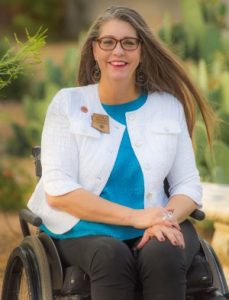 Rep. Jennifer Longdon said, “If the state is going to be “pro-birth”, it should help the parents raise a child.”

Rep. Jennifer Longdon gave an impassioned speech about the disability community and how dismal Arizona’s funding and support for the developmentally disabled is. If the state is going to be “pro-birth”, it should help the parents raise a child with layers of medical needs and co-morbidities.

“Caring for these children is extremely expensive and emotionally draining without appropriate support, according to Longdon, and the state doesn’t do enough. When parents choose to have a baby with a known birth defect, they also have to consider who will care for their child in their adulthood, after the parents are gone,” London said.

It’s ironic that in the name of liberty and medical freedom, the Republicans stand vehemently against public health measures like masks and vaccine passports, but when it comes to bossing women around and dictating medical treatment down to what information can be given to us is OBVIOUS government overreach.

Above is a video of my floor speech. Several Democrats gave great speeches. A few other Dems picked up on my theme of: “if Arizona were truly a ‘pro-life’ state, we would fund…” Arizona IS NOT a pro-life state as long as we shortchange maternal and child health, ignore Adverse Childhood Experiences, and force children and their Moms to live in poverty. As one member said, Arizona is not pro-life; it’s “pro-birth.”

The Senate adjourned until Monday, while the House was still debating SB1457 on Thursday afternoon. Of Course, SB1457 passed both houses on a party-line vote. In the featured photo, members in orange are voting remotely. They had passed SB1457 earlier in the day, but apparently got tired of waiting for us. As of April 23, 2021, our last hope is Governor Doug Ducey. Tell him to veto. We have three days to convince Ducey to veto the worst anti-abortion bill ever passed in Arizona. Rumor has it that they want this law to be a Supreme Court test case on abortion.

Watch the three-plus hours of Floor action in the House and the final read vote explanations on SB1457 (toward the end at about 2:25) at this link: https://www.azleg.gov/videoplayer/?eventID=2021041060

About the Author: Pam Hannley