Read This to Laugh Right Now!

and when better to do it, then after the Republican Convention!
But first, On Former Trump Advisor Steve Bannon being charged with Fraud in the “We Build the Wall Campaign”
Bannon is “accused of stealing money from people who thought they were donating to build Donald Trump’s wall – because you know, you wouldn’t want criminals sneaking into the country.” – Trevor Noah
“I can’t believe this – another Trump guy has been arrested? After the Aryan Brotherhood and Latin Kings, the largest prison gang in America might be the former Trump campaign officials.” – Trevor Noah
“Seriously, Trump has enough criminals around him for a [expletive] ‘Ocean’s Eleven’ remake.” – Seth Meyers

“You know, Steve Bannon, the gentleman who currently looks like a guy selling exotic reptiles on the Venice Beach boardwalk. It’s like if the crypt keeper spent a month in a tanning booth.” – Seth Meyers
“I don’t know, maybe these charges are nothing. I mean, does Steve Bannon look guilty to you? Oh, yeah. Oh, yeah, he definitely does. Just so you know, by the way, that’s how he looked before he got arrested.
– He looks like someone you find sleeping in the bathroom stall at Margaritaville.
– He looks like an unemployed Martha Washington impersonator.
– He looks like a guy who yells at Little Leaguers when he doesn’t have a kid on the team.
– He looks like every composite photo of what Elvis would look like if he were alive today.
– He looks like every guy who’s ever tried to sell me a Jacuzzi.” – Jimmy Fallon

On The Republican National Convention
“The Democratic National Convention closed with Joe Biden’s warning that we have to overcome a season of darkness. Well, this week, darkness gets their turn at bat.”
“So in lieu of a platform, the R.N.C. released a one-page resolution that pledges its undying support to Trump. That’s not a political party – that’s a cult! (Imitating Trump) ‘Welcome to the convention, everybody. Take off your masks and put on your matching Nikes and your MAGA hats. Then drink up our bleach-flavored Kool-Aid.'”
“Just like the Democrats, the G.O.P. has given each night of the convention a different theme. I believe the four nights are ‘Famine,’ ‘Pestilence,’ ‘War’ and ‘Death.’ OK, I’m being told the actual themes are ‘Land of Promise,’ ‘Land of Opportunity,’ ‘Land of Heroes’ and ‘Land of Greatness.’

“So death is one plank of the Republican platform – what else does the G.O.P. stand for? No one knows, because it was announced last night that the G.O.P. will not write a 2020 platform. Well, that makes sense, given how much Trump struggles to get down from platforms.” – Stephen Colbert
On Four Nights of Trump(s)
“And unlike any previous conventions, the candidate, Donald Trump, is gonna be featured each day of the convention. Each day. That is shocking; Donald’s going to work four days in a row?”  – Stephen Colbert
“And you know, Trump making a speech every single night may seem unusual in terms of convention traditions, but if you think about it, it makes sense. The Democratic Party had to give everyone a speaking slot because they’re trying to appease a lot of different groups – Black people, Latinos, progressives, disaffected Republicans, fans of ABC shows. The Republican Party only care(s) about appeasing Trump, because it’s his party now and if you don’t like it, you can shut the [expletive] up or join John Kasich in that field.” – Trevor Noah

“But the president isn’t the only speaker at the convention this week. The list also includes First Lady Melania Trump and all four of the president’s adult children. Six Trumps. You know that the president is desperate for speakers when even Tiffany made the cut. No one saw that coming.” – James Corden
“That lineup looks like a list of people you see banned from a chain restaurant for verbally harassing the manager.”  – James Corden
On Screaming Speech Delivered by Donald Trump Jr’s
Girlfriend, Kimberly Guilfoyle
“You know when you’re at a party and the music turns off and then all of a sudden you’re talking way too loud? That’s basically what Guilfoyle did for an entire speech.” – Trevor Noah 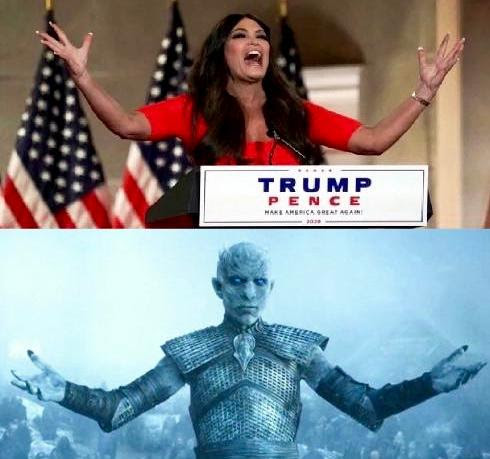 “First of all, I want to wish a speedy recovery to anyone who was listening on headphones. I’m praying for you. And I guess we found the one person who actually signed up for Rudy Giuliani’s master class.” – Trevor Noah
“The G.O.P. drew just 15.8 million people, while the first night of the D.N.C. attracted 18.7 million viewers. Unfortunately for Trump, Nielsen doesn’t have an Electoral College; nor does it count the millions of people with their TV sets off who still heard Kimberly Guilfoyle’s tortured cries echo through their dreams.” – Stephen Colbert

On (Real) Republican Slogan: MAGA-A
“‘Make America great again, again.’ It doesn’t inspire confidence. If your friend said to you, ‘I’m getting married again, again,’ you’d be like, ‘Sounds like that might not last.'” – James Corden
“If my plumber said he needed to fix my toilet ‘again, again,’ I would find a new plumber – and a new toilet.'” – Trevor Noah 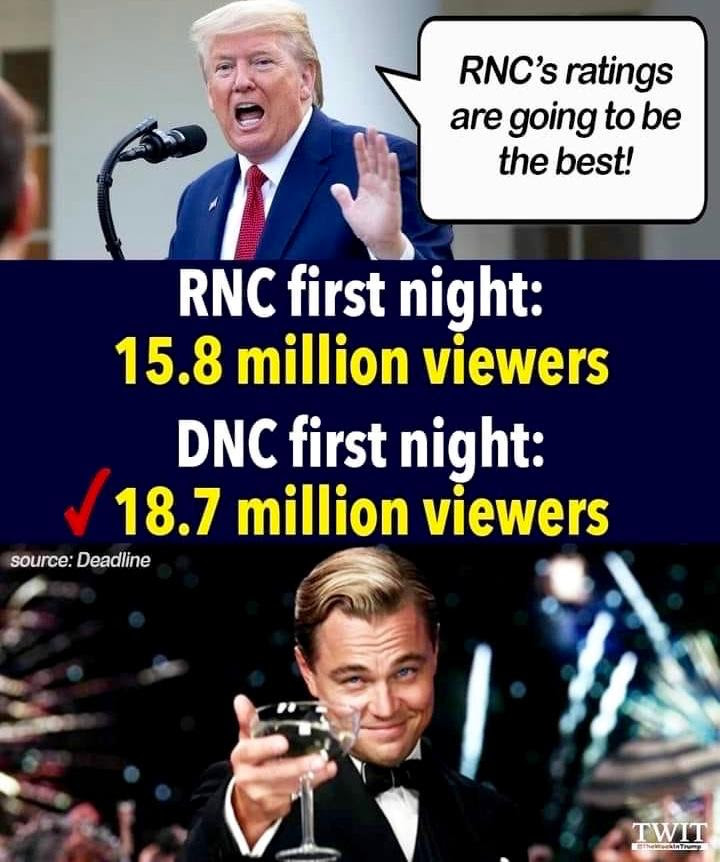 “It’s almost like they never made America great in the first place.” – James Corden
“So that was Mike Pence’s speech. And I guess we finally found out why Pence always has the permanent squint. Yeah, his own face is going, ‘Are we really saying this [expletive]?” – Trevor Noah
“Because right now in America, we’re facing a global pandemic that has killed 180,000 Americans, heavily armed Rambo wannabes are murdering people in our streets, the strongest hurricane in the history of the Gulf Coast is making landfall as I speak. And the R.N.C.’s message is, ‘Who’s up for four more years?'” – Stephen Colbert
“Essentially, they’re trying to convince everyone that this massive failure is actually massive achievement, which is not something normal people do when they apply for a job: ‘I see on your résumé here, it says that you crashed a car into Dunkin’ Donuts.’ ‘Yeah, dude, but it would have been, like, a lot worse if Joe Biden was driving.'” – Trevor Noah

“But here’s the thing that I don’t think Republicans understand – it’s hard to scare people about the damage Joe Biden could do after the damage Donald Trump has already done. ‘Joe Biden could destroy your way of life.’ Dude, I’m Clorox-wiping my grapes – how much worse could [expletive] get?” – Trevor Noah
“Trump’s presidency is like your 48-year-old cousin’s D.J. career – if it hasn’t been successful by now, it’s not going to be.” – Trevor Noah 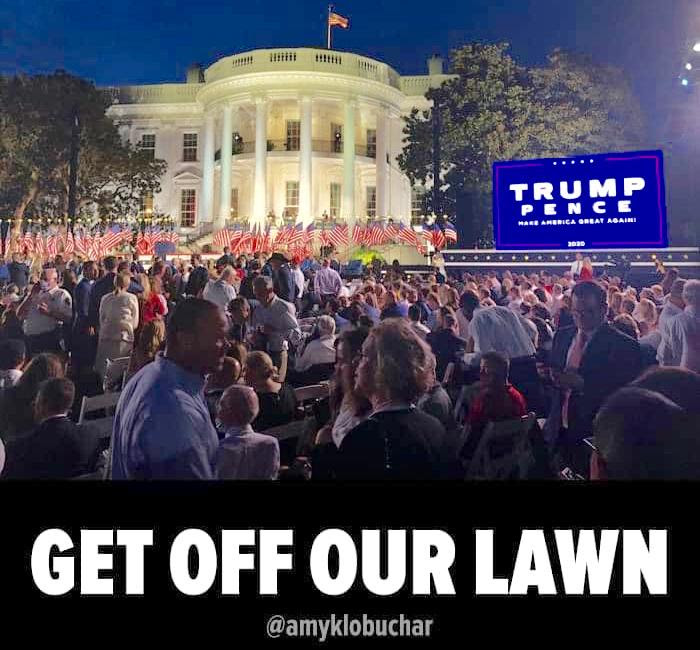 “One big problem is that Trump and the G.O.P. were in Covid denial for months. The Democrats actually looked ahead, made time to produce something for their convention, four pretty smooth nights. The Republicans had to cram at the last minute. [imitating Trump] ‘I don’t understand – why can’t I just pay someone to take the convention for me?'” – Stephen Colbert
Have a good weekend and stay safe!

About the Author: Kimberly Scott