On This Day 55 Years Ago, the Voting Rights Act Was Signed Into Law

In our lifetime Americans have been beaten, bloodied, and murdered because they wanted to vote. For Black Americans, their fundamental right was denied by white supremacy hiding behind white hoods and in plain sight in legislatures, police stations, and courtrooms. 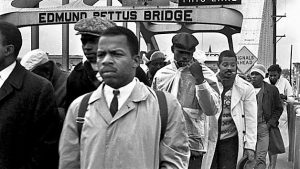 But those torches and burning crosses, the batons, fire hoses, attack dogs, and unfair laws and trials could deny that right for only so long. On March 7, 1965, John Lewis and hundreds of brave and righteous souls risked their lives to cross a bridge in Selma named after a Klansman to reach the other side of justice. The blood spilled that Sunday turned the tide that for too long suppressed the rights of our fellow Americans.

Congress passed the Voting Rights Act a few months later. And on this day 55 years ago, August 6, 1965, President Lyndon Johnson signed it into law with Dr. King and John Lewis standing watch as angels on the nation’s shoulder.

It began to dismantle barriers to voting and make our elections more fair, free and representative. I was always proud to vote to reauthorize it over the years. But Republicans at every level chipped away at it with restrictive voting laws under the false flag of “voter fraud.” And in 2013 the Supreme Court gutted the Voting Rights Act, holding that times have changed and blatant voter discrimination was rare, contrary to the assault on the ground. Justice Ginsburg wrote that the decision was like “throwing away your umbrella in a rainstorm.”

Today, it’s still pouring. In 2019, more than half the states — 29 — introduced or carried over at least 87 bills to make it harder to vote. Every election cycle repeats the story of voters of color standing in line for hours and hours. The House passed a reauthorization of the Voting Rights Act, later renamed in John Lewis’ memory. Mitch McConnell and Senate Republicans refuse to bring the bill up for a vote, while they continue to stack the courts with judges who don’t believe in it. And Donald Trump uses the pandemic as an excuse to continue denying Americans the right to vote and undermine the integrity of our elections. We’ve seen this story before in our lifetime. It’s still un-American.

Every eligible voter should be able to vote and have it counted. If you have the best ideas — you have nothing to hide. Let more people vote. It’s simple. As President, I will work to enact the John Lewis Voting Rights Act. The battle for the soul for America has many fronts; the right to vote is the most fundamental.

About the Author: Joe Biden