Biden has expanded his lead over Trump in the April edition of OHPI’s Arizona Public Opinion Pulse (AZPOP), now leading the president 52 to 43 with 5 percent of voters undecided.

As Arizona residents endure a stay-at-home order and thousands of people suffer from coronavirus, President Donald Trump continues to fall in a head-to-head matchup with former Vice President Joe Biden.

This nine-point advantage for Biden is a sign the former vice president continues to gain traction in a historically ruby-red state. After a December poll showed Biden trailing the president, capping off a summer and autumn of decline for the vice president, he jumped to a six-point lead in March and has increased that margin an additional three points in the month since.

“What is interesting is the incredibly small margin between Trump’s ceiling and floor of support against Biden,” said Mike Noble, Chief of Research at Phoenix-based public opinion polling and market research company OH Predictive Insights. “Trump’s biggest pain-point is in Maricopa County and will need to triage that if he hopes to carry Arizona’s eleven Electoral College votes come November.” 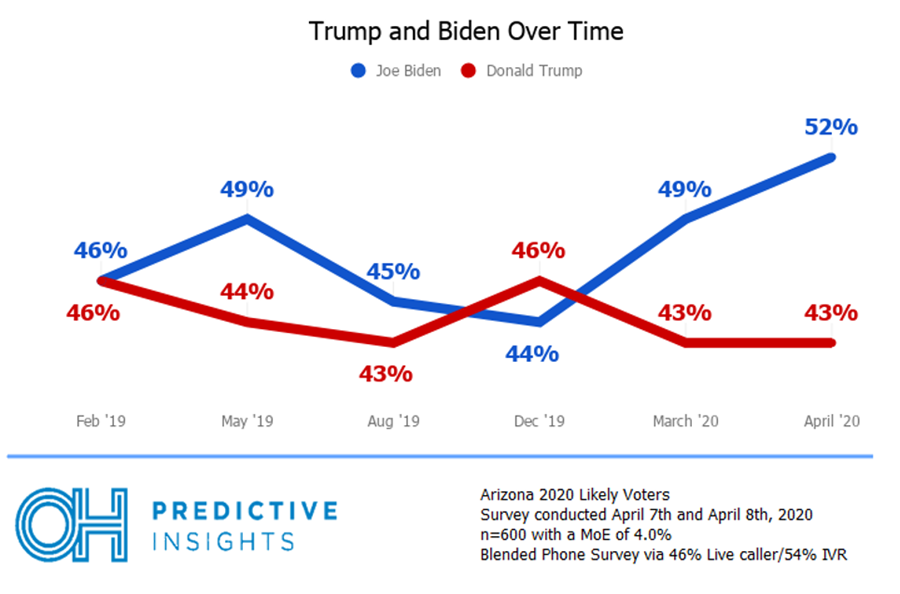 However, Biden’s lead in these polls may not be as solid as it first appears. There are signs that Trump’s base may be much more energized than the former vice president’s. Seven in 10 voters who said they preferred Trump in a head-to-head matchup with Biden said they were “Extremely enthusiastic” about voting in the upcoming election, compared to only 3 in 5 Biden supporters. 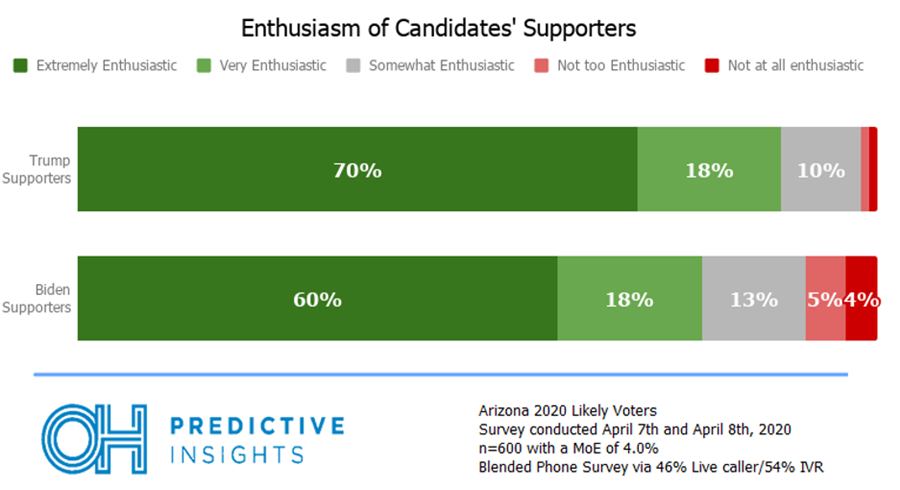 Another sign that Biden may struggle to get his supporters to the polls on election day is that almost ten percent of his voters are either “Not too enthusiastic” or “Not at all enthusiastic” about the upcoming election, whereas only 2 percent of the presidents’ supporters say the same.

“If Coronavirus is still rampaging through the country in November, campaigns may struggle to turn out voters on Election Day,” says Jacob Joss, data analyst at OHPI, “That task is going to be made even more difficult if a candidate’s supporters are not enthusiastic about voting for them in the first place. While the president faces a significant deficit, in these unprecedented times he is by no means out of this race.”

Methodology:  This blended phone poll was conducted via cell and landline. The survey was completed by OH Predictive Insights on April 7th, 2020 and April 8th, 2020, from an Arizona likely 2020 General Election voter sample. The sample demographics accurately reflected party affiliation, gender, region, and age. The sample size was 600 completed surveys, with a MoE of ± 4.0%. Numbers may not total 100%, due to rounding. Click here to view the poll report results