Although staunchly Catholic Supreme Court nominee, Amy Coney Barrett, has never weighed in on medical aid in dying legislation, she certainly believes it’s a sin. She follows Pope Francis, who reiterated on September 22, that “assisted suicide and euthanasia are intrinsically evil, in every situation or circumstance.”

Barrett’s youngest child of seven –two of whom are adopted from Haiti– was diagnosed with Down Syndrome during a prenatal screening but chose to keep the baby boy.

Barrett, currently 48, was confirmed to the Seventh Circuit Court that includes Indiana, Illinois, and Wisconsin by Donald Trump in 2017, her first judicial appointment.

Since then, one of her dissenting opinions would have banned Indiana women from aborting a fetus with Down Syndrome.

She has stated that Roe v. Wade ignited a national controversy, when abortion rights could have been left to the states, indicating she may not try to tamper with medical aid in dying laws.

Barrett will cement a far-right majority with Clarence Thomas, Samuel Alito, and Brett Kavanaugh, also Catholics, and Neil Gorsuch, a Protestant. Gorsuch wrote a 2006 book titled The Future of Assisted Suicide and Euthanasia, condemning what is now called medical aid in dying.

“All human beings are intrinsically valuable, and the intentional taking of human life by private persons is always wrong,” Gorsuch wrote.

Barrett clerked for the devoutly Catholic, Justice Antonin Scalia, and says his views are her own.

What is Medical Aid in Dying?

According to Arizona End of Life Options, the term refers to a medical practice in which terminally ill, mentally capable adults with a six-month prognosis or less may request a prescription from their doctor for medication to be self-ingested so that they can die peacefully in their sleep.

The patient must be 18 years or older.

A failsafe timeline has been patterned after Oregon’s law:

See the video, Six Options at the End of Life with Dwight Moore, Ph.D.

The lethal medication consists of two anti-nausea pills taken one hour before ingesting the lethal medicines to make sure the patient doesn’t throw up the bitter cocktail and survive, as some patients have done in the past.

The patient takes either Secobarbital (Seconal 10 grams) mixed in liquid by another person, or a compound of morphine, propranolol (to slow the heartbeat), along with Valium and digoxin.

The time to death from ingestion to death ranges from five minutes to several hours. The average time is 90 minutes.

One patient reportedly downed a shot of Baileys Irish whiskey as a chaser.

Dr. Timothy Quill, a respected Rochester, NY, palliative care physician, urged the Supreme Court to overturn the state’s ban on what was then called assisted suicide.

In 1991, a grand jury refused to return a criminal indictment against Dr. Quill after he admitted in The New England Journal of Medicine that he prescribed barbiturates used by a 45-year old leukemia patient to end her pain.

Quill draws a sharp distinction between patients with terminal illnesses from patients with mental disorders, saying, “he has not helped his suicidal patients one bit.”

(New York has never passed a medical aid in dying law despite Dr. Quill’s victory, but Governor Andrew Cuomo said he would sign the bill when the pandemic is over, Independent reported.)

In 2008, Washington state voters approved the Washington Death with Dignity Act by a 58 percent vote.

Do State Bans Violate Due Process?

The question the Supreme Court posed in the Washington and New York cases was: do state bans on assisted-suicide laws violate the Fourteenth Amendment Due Process Clause by denying competent terminally-ill patients the liberty to choose death over life?

The majority decision, written by Chief Justice William Rehnquist, held that the “right to assisted suicide is not a fundamental liberty interest protected by the Due Process Clause, since its practice has been, and continues to be, offensive to our national traditions and practices”.

However, the Court was respectful of people’s right to debate the issue for themselves.

Justice Rehnquist wrote, “Throughout the nation, Americans are engaged in an earnest and profound debate about the morality, legality, and practicality of physician-assisted suicide.”

Justice Anthony Kennedy agreed, “the due process clause did not confer a right to aid in dying but that states were free to explore the issue.”

In 2006, the US Supreme Court handed a 6-3 victory to proponents of medical aid in dying, in Gonzales v. Oregon.

The Court held that Attorney General George Ashcroft acted without legal authority when he threatened in 2001 to revoke physicians’ licenses for violating the federal Controlled Substances Act.

In his majority opinion, Justice Kennedy wrote that Ashcroft acted contrary to “the background principles of our federal system”.

“His decision was clearly influenced by the majority’s view that the regulation of medical practice belonged, as a general matter, to the states,” The New York Times’ Linda Greenhouse wrote,

Scalia, dissenting, wrote that assisting a person to take his or her life is no more a “quintessentially medical judgment than is polygamy or eugenic infanticide.” 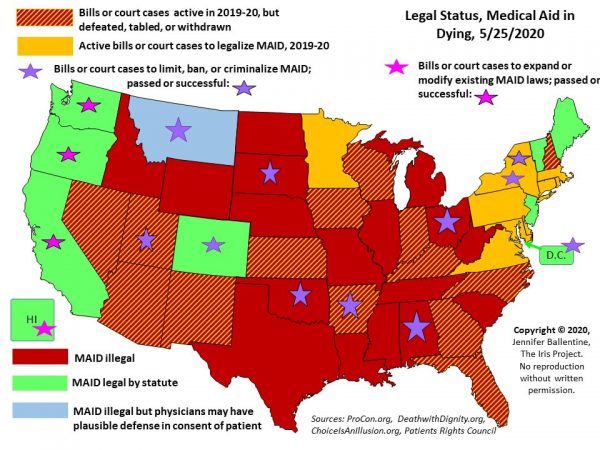 Nine states and the District of Columbia have laws that give terminally ill residents end-of-life options.

As societal mores evolve to embrace the concept that terminally ill patients should be able to die peacefully rather than painfully, 20 states have drafted medical aid in dying legislation.

However, passing these bills through the legislative process has largely been halted due to the coronavirus pandemic.

Medical aid in dying supporters hope that Barrett and her brethren will honor the Court’s two precedents, leaving medical aid to dying regulations to the states.

However, as legislation snowballs, opponents aim their cases toward the Supreme Court.

On April 2, a New Jersey judge made sure that wouldn’t happen in his case.

New Jersey.com reported that the judge dismissed a lawsuit over New Jersey’s aid-in-dying while taking an extra step to prevent future legal challenges that would delay terminally ill patients’ decisions to end their lives.

“Superior Court Judge Robert Lougy in Mercer County ruled that a doctor, pharmacist, and patient who objected to the law were not directly harmed or affected by it because it is voluntary. Because they are not affected, they don’t meet the legal standard to bring a case,” Judge Lougy wrote.

“Lougy didn’t stop with dismissing the case. He did so ‘with prejudice,’ meaning the plaintiffs cannot refile it, and then went on to judge the plaintiffs’ legal claims, finding that all 11 of them are without merit. That could hamper another challenge that makes similar arguments against the law,” New Jersey.com wrote.