Martha McSally is dodging and spinning for her political life. She is polling consistently behind her Democratic challenger Captain Mark Kelly, most recently by 7 points, one poll recently showing Kelly with an astounding 12 point lead! McSally, the unelected, autocratically-appointed, quasi-incumbent, realizes that citizens’ concern about the cost of medical care, and especially prescription drugs, is a key weakness for her.

McSally is incredibly vulnerable on her health care record, having voted with her caucus to gut the Affordable Care Act, attempting to repeal popular provisions such a pre-existing conditions coverage. She badly needs to distract from that terrible record and is doing so by claiming to be leading the fight for lower prescription drug prices for seniors.

Polling indicates that vast bipartisan majorities are in favor of action on lowering prescription drug prices. Senator Grassley (R-Iowa), sponsor of the GOP’s nominally “bi-partisan” drug cost bill in the Senate, is said to have warned repeatedly that action on this issue will be key to the GOP holding on to the GOP’s Senate majority this year. This issue is not just key to this Senate race in Arizona, but to control of the Senate majority. 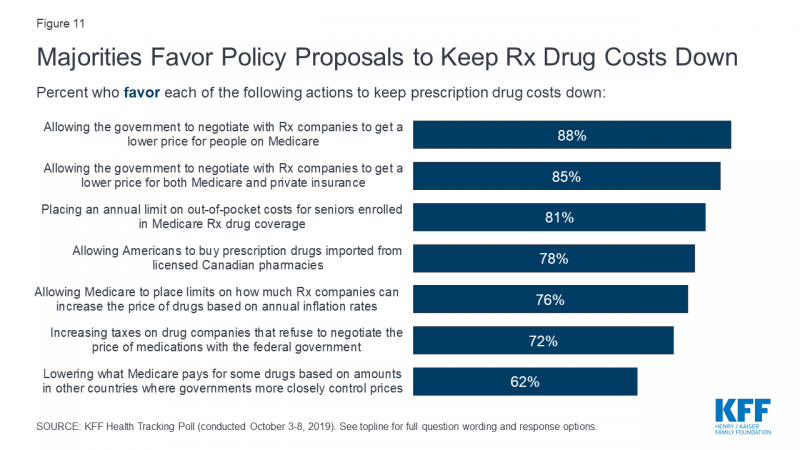 You don’t see cross-partisan agreement like this on many issues in American politics, so controlling the narrative and being seen as effective on these issues is a vital issue in all Congressional races this year. Almost 9 of 10 Americans want the government to be able to negotiate with drug companies to get lower prices for prescription drugs. That’s “Is the sky blue?” territory.

McSally says she is backing Grassley’s “bi-partisan” (scare quotes here because his “partner” on the bill, Ron Widen [D-Oregon], only released a joint statement in support of the bill, but is not a co-sponsor, and does not list it among his supported bills) S.2543, The Prescription Drug Pricing Reduction Act.

McSally has also introduced her own Senate bill, S.3384, The Lowering Prescription Drug Prices for America’s Seniors and Families Act. She is pressing her case strongly in ads, stump speeches, and telephonic town halls that she is therefore “leading the fight” and “walking the talk” to contain the cost of prescription drugs on behalf of Arizona’s seniors.

So what legislation is Mark Kelly supporting on this issue, and what would the bills backed by McSally actually do by comparison? 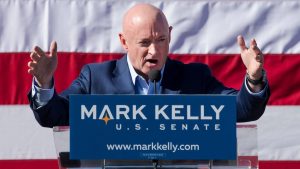 Mark Kelly supports the truly bi-partisan HR.3, The Elijah E. Cummings Lower Drug Costs Now Act, passed by the House last year, which is currently lodged in Mitch McConnell’s legislative death maw along with some 400 other vital bills passed by the Democratic House, many of which would also pass the Senate, but have been refused a vote in the Senate due to Moscow Mitch’s stranglehold over the Senate agenda, which electing Mark Kelly would greatly assist in breaking.

Essentially, it does three main things that are a nightmare for big Pharma:

Together, these reforms are expected to save taxpayers almost $500 billion over the next decade, most of that from the negotiation mandate alone, and to save consumers many more billions in out-of-pocket costs.

Needless to say, Big Pharma, and the GOP pols who to continue wallowing in their donations, deeply hate this bill. 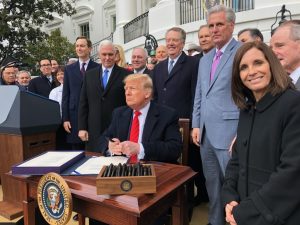 McSally photo bombing Trump. Her healthcare plan appears to be written by the Pharma industry.

What Does Grassley’s Senate Bill S2543 Do?

What it emphatically does not do is allow for negotiation over the cost of Medicare’s drugs – at all. Even insulin. It continues the absurd practice of not allowing HHS to negotiate, which almost 90% of Americans want reformed. A further demonstration, if it were really needed at this point, that the GOP does not give a shit what the American people want.

Like HR.3 it also caps drug price increases to the rate of inflation, enforced by rebate, but it is not applied to private health plans, only Medicare prescription plans.

Even this watered down, stone soup of a bill, projected to save merely 1/5 the savings to be realized by HR.3 is opposed by big Pharma and unlikely to escape Moscow Mitch’s legislative black hole.

What does McSally’s own bill do?

McSally’s Bill seems to address some major holes in Grassley’s bill regarding the negotiation of Medicare drug prices, and make laudable progress on the importation of drugs from Canada, but the devil is  in the details.

McSally’s bill only allows a short 3-month window for negotiation of prices on drugs that are past their original patent period and that have no generic equivalents, leaving out any drug that is still on patent. The only cap on the final negotiated price is the best price any U.S. organization is currently getting, not an international index. So if the pharma company is gouging Americans generally, they can dig in their heels for the three month negotiation period, and they get to keep gouging Medicare.

The bill allows importation drugs from Canada, but with a long list of important exclusions, including that they must be purchased by the individual, not for resale, with a limit of a 90 day supply. Eligible drugs do not include any: controlled substances, biologics (a wide variety of products derived from human, animal, or microorganisms by using biotechnology), infused drugs, intravenous drugs, any non-orally administered drugs, any drug requiring refrigeration or that is light sensitive, or manufactured using DNA plasmids, recombinant DNA, synthetic peptides, or monoclonal antibodies.

That leaves out a whole lot of drugs for which people might seek a cheaper alternative in Canada. I suppose you can do mail-order, but not if the online Canadian pharmacy sources from outside Canada. And the Canadian pharmacies have to open themselves to additional intrusive and costly inspections by American agencies in order to participate.

Again and again, you find that in McSally’s bill the top-line talking point is practically subsumed and made a dead letter by the details. It seems as if it were written by the pharma industry to take away with one hand what is dangled before the voter with the other. This bill is not designed to actually save money for the taxpayers or consumers, it’s designed to provide McSally with talking points she can use to bamboozle voters into thinking she’s actually doing something for them.

Finally, to be fair, it does seem to simply reiterate the $3100 out of pocket cap of the Grassley bill. So where it’s not film-flam, at least it’s merely redundant.

“Senator McSally is a leader in the fight to lower prescription drug prices. By taking on Big Pharma and putting her constituents first, Senator McSally has shown that she doesn’t just talk the talk—she walks the walk,” said Senator Check Grassley upon the announcement of McSally’s support for his sham bill.

Nothing McSally is proposing will have a substantial impact on prescription drug prices. There is little there for Medicare participants, and certainly nothing for folk with private insurance plans. Despite her voter-friendly claim to be committed to forcing Medicare drug suppliers to negotiate, and to allow the importation of drugs from Canada, the details of her own bill undercut and nullify those misleading claims. She is shucking and jiving for voters while taking hundreds of thousands from the health insurance and pharma industries to protect their bottom lines, at the expense of your pocketbook.

Her claims are merely election year puffery about a vital issue on which she and her entire party are incredibly, and rightly, very vulnerable and out-of-step with the vast majority of Americans. She deserves to be sent packing, having never earned her seat and the confidence of Arizona’s voters in the first place.

Mark Kelly is the candidate who deserves your vote if you are truly concerned about the cost of your, and/or your loved ones’ prescription drugs, health care costs, and coverage.