Do you know where your Arizona state representative was on January 6, 2021, when Trumpist domestic terrorists attempted an insurrection and stormed the Nation’s Capitol?

The people who reside in LD 11 may be surprised to know that one of their state representatives, Mark Finchem apparently was closer to the attack than he professed to be at the time.

Recent reporting by Jerold MacDonald-Evoy of the Arizona Mirror has relayed that footage obtained on social media showed the LD 11 State Representative and aspiring Secretary of State Candidate (God help us all) was steps away from the East Capitol pathway leading up to the building after the insurrectionists had stormed the area.

Click on the video link below to see for yourself. 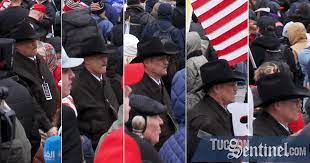 Immediately after the events of January 6, 2021, Finchem repeated the false narrative that it was Antifa forces that stormed the Nation’s Capitol.

In the article, MacDonald-Evoy writes:

“At 1:50 p.m., the on-scene Metro Police Department commander had declared a riot.

In text messages released by Finchem, he texted fellow #StopTheSteal advocates Michael Coudrey and Alexander that he was on his way in a golf cart.

Footage reviewed by the Mirror appears to show Finchem riding in the back of a golf cart, wearing the same hat and jacket from hours earlier.

At 3:16 p.m., Finchem tweeted a photo of Capitol rioters saying, “What happens when People feel they have been ignored, and Congress refuses to acknowledge rampant fraud. #stopthesteal.”

But the Mirror’s analysis indicates that Finchem took the photo sometime before he posted it online. Videos posted on the social media platform Parler that were aggregated by ProPublica and organized by the times they were posted and where they were taken makes it likely that Finchem took his photo at least 40 minutes earlier.”

The fringe lawmaker has not offered a comment for this new photo revelation. Finchem is a thorn in the side of political reality (please click here to read earlier Blog articles on Finchem) and who is the subject of a recall effort for his ultra-right-wing views (he thinks the Oath Keepers are “nonpartisan” and the Southern Poverty Law Center website is “hate-filled”) and acts on, before, and after January 6, 2021,

You can clearly see Finchem walking in the crowd and he is not 500 yards away from the Capitol like he said he was. This footage was taken after the rioters had overtaken the Capitol Police or were on the verge of entering or already in the Capitol building.

Based on the new footage, Mr. Finchem has a lot of explaining to do. Do not be surprised if he has to do it in front of a judge. He definitely needs to explain himself to the people of LD 11 and Arizona.

He has demonstrated again that voters should not reward him by choosing him to be the next Arizona Secretary of State or putting him back in the Legislature.