Arizona Secretary of State Katie Hobbs said she will issue a damning report about the Maricopa County election fraudit within two weeks. “This is nothing more than a grift and a sham,” she said at the July 26, 2021 meeting of Democrats of Greater Tucson.

Her office has hired independent election observers since May 24 to visit the Maricopa fraudit and write their daily observations. “We are going to be coming out with a report in the next couple of weeks that really encapsulates all of that. Look, no matter what they come up with, this isn’t a real audit and their results aren’t good and can’t be credible,” she said.

“Because this is not a real audit. We’ve been working hard to highlight the problems that are going on and taking place with this exercise, and all the things that make it not a real audit,” she said at the packed online meeting.

Since April 22, the Republican Senate President had incompetent, inexperienced contractors review the 2.1 million ballots cast in Maricopa County. The fraudit was launched in the wake of Trump’s 2020 election loss.

“The intent has never been to validate the election results, the intent has been to find non-existent fraud and make it up if they can’t,” Hobbs said.

She pointed out that “we’re really starting to see the wheels come off the bus here.” For example, she cited:

“You can be confident in all three elections that we ran in 2020, they were secure, they were fair and the results we certified are accurate,” Hobbs said. “And so everything you see to the contrary really is just made up of people talking about Sharpies or bamboo fibers in ballots. I can’t keep, keep track of all the conspiracy theories,” Hobbs said.

Hobbs is an Arizona native who served in the Arizona House of Representatives for two years and then in the Arizona Senate for 6 years, where she was Senate Minority Leader. She was elected as Secretary of State in 2018. Today she is running for Governor.

“Our state government is being run by a group of conspiracy theorists who are out of touch with everyday Arizonans. Instead of working on the issues that matter most to the people, they are busy relitigating the 2020 election because they don’t like the result,” she said.

“Meanwhile, the Republican primary is a circus with five candidates and counting, who are all trying to be the most Trumpy option,” she said. 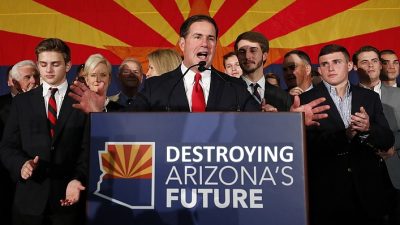 She denounced Gov. Ducey for declaring that the Covid pandemic is over. “He was willing to sacrifice the lives of 17,000 Arizonans, to not invoke further restrictions or shutdowns, because now he can run for president. He’s also sitting on a pile of eviction prevention dollars that aren’t being utilized to keep people in their homes, as well as other money that should have gone to small businesses to help them weather this storm.”

“It is not leadership to say ‘I’m going to do this,’ put  small band-aid on this problem, and kick the can down the road for the next person to deal with the big impact of it,” said. To date, 18,183 people in Arizona died of Covid because Gov. Ducey minimized the pandemic.

Starting out as a social worker Hobbs, “saw firsthand how our broken politics often derail any real action and makes real change harder. Still, I also learned how to break through that partisan gridlock and do some really good things for Arizona. I eventually ran for office because I was tired of politicians who cared more about their reelection than serving their community.”

“We can make Arizona the best state in the country to live, work and raise a family. But we can only do that if we put our differences aside and start working on the issues that we keep ignoring. She spelled out a 7-point platform:

“If we don’t fund these efforts now, it will be far more expensive and difficult down the road,” she said.

Hobbs said her campaign has raised more than $1 million so far this year, and nearly a dozen state legislators and three major labor unions have already endorsed her campaign. “And I’m just getting started,” she said.

You can find out how to donate and work for Hobbs’ campaign by visiting www.KatieHobbs.org.