Joe Biden and the Democrats Plan for Tomorrow

This article originally appeared on the Blog for Arizona.

While Donald Trump and his cult enablers play Dr. Death and Dr. Doom with the country either by:

Joe Biden and the Democrats have been acting responsibly during the public health emergency and planning for tomorrow.

The Democrats in Congress

The House of Representatives led by Nancy Pelosi, over Republican objections, passed a measure that will allow Congressional Representatives to vote remotely. Now members can social distance and vote safely

Welcome to the Twenty-First Century.

The House of Representatives led by Nancy Pelosi, over Republican objections, secured a three trillion dollar stimulus measure that would:

Again, where are the Republicans?

Joe Biden, unlike his potential predecessor, will approve of campaign literature like the Timeline ad or the Trump deflects the truth ad that is fact-based and accurate.

Donald Trump can deflect and shift blame all he wants, but the hard truth is he failed to protect our nation from the worst public health and economic crisis in our lifetime. pic.twitter.com/5kHQnJrK2a

Joe Biden, unlike his potential predecessor, is, along with Bernie Sanders, is bringing the Democratic Party back together again and steering it in a forward direction.

Joe Biden, unlike his potential predecessor, is going to have a progressive-minded female Vice President.

Joe Biden, unlike his potential predecessor, is going to nominate an African American woman to the Supreme Court. One wonders if this is Senator Kamala Harris’s eventual destination.

Joe Biden, unlike his potential predecessor, has had agreeable discussions with Governors on the need for greater federal assistance and coordination. Please see the May 14, 2020 video below of the former Vice President talking with Michigan Governor Gretchen Whitmer (a potential Vice President Candidate,) Connecticut Governor Ned Lamont, and New Jersey Governor Phil Murphy.

Joe Biden, unlike his potential predecessor, has issued numerous plans to build on Obamacare. Please click on this link here to read how the former Vice President hopes to improve health care access and affordability for American Citizens. These ideas include:

Joe Biden, unlike his potential predecessor, would expand the modernization of the American Voting System. Please view the Facebook Posting from May 18, 2020. 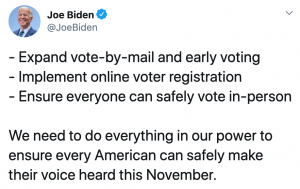 Joe Biden, unlike his potential predecessor, would build a post-pandemic economy for all Americans which would include:

Please view the below video to see the former Vice President present his ideas for the country.

Other Democrats and activist groups, who are vocal supporters of Biden like Senator Elizabeth Warren,  former Chicago Mayor and White House Chief of Staff Rahm Emanuel, the journalists at Vox, and the think tank Third Way, have offered plans and suggestions for revitalizing and rebuilding the country.

The Democratic Party, led now by Joe Biden, is clearly the party thinking about tomorrow and pursuing an inclusive agenda that moves the country forward.

That can not be said about the Cult of Trump.

Register/sign up for the Permanent Early Voting List (PEVL) in Arizona or any state that allows early or absentee balloting and mail. Arizona residents can sign up at servicearizona.com

Arizona residents, mail your General Election ballot by October 28, 2020, for the November 3, 2020 election.

Check-in with the Secretary of State’s office where you live to verify your mail-in ballot was received, processed, verified, and counted.

Know the voter ID requirements in your state.

If you can, support Clean Election Candidates with a small contribution.

Also, please remember to stay informed on all the candidates and vote for all the offices on the ballot.

Also, remember to research all the ballot initiatives, sign to get them on the ballot if you support the measure, and vote on them as well.