In Her Own Words: Kamala Harris Rallies Tucson for Joe Biden

In the spirit of the late great John McCain, I was thinking, let’s start with a little straight talk. Now, you know, there has been some talk about my values. Well, let me just tell you, Tucson. I am a proud patriotic American. I love my country. And our values reflect the values of America. Our values tell us we have witnessed the worst, the biggest disaster of any presidential administration in this country’s history. Our values tell us that. Our values tell us that we should not be in a moment where over 225,000 people have died in our country, over eight and a half million people have contracted a virus. When we have known, when we got the information, we have known how serious this is.

Listen, there is so much at stake in this election. I’m just going to start by talking about a few things that we know. We, as a nation, are in the middle of four crises happening at once. We’re in the midst of a pandemic, a public health pandemic that, as I said, has caused over 225,000 Americans to die. Many of whom died without any family members being able to be with them, hold their hands, and look in their eyes because of the nature of this virus. Over eight and a half million Americans now have a preexisting condition and untold long-term health consequences because of this virus.

Can you imagine, as a parent, as a small business owner, as a working person, if on January 28th, you would have known what the president had known, what you might’ve been able to do? To plan, to prepare?

Knowing that even before this pandemic, so many Americans are working two and three jobs to pay the rent and put food on the table?

Knowing that even before this pandemic, most Americans didn’t have more than a thousand dollars life savings, what people might’ve been able to do to prepare?

Healthcare should be a right 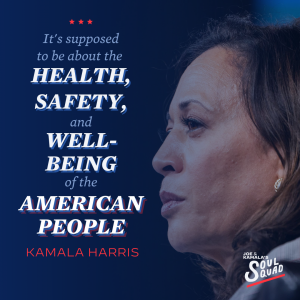 Because you see, on the one hand, you have a Joe Biden, who is saying that we know access to healthcare should be a right and not just a privilege of those who can afford it. Joe Biden, who, together with President Obama, was responsible for creating the Affordable Care Act that brought healthcare to over 20 million people who didn’t have it. Who said, “we will protect people with preexisting conditions.”

Joe said, “we will protect you and the people you love.” Joe says, “If we win, we’re going to get in there and expand coverage. We’re going to bring down the eligibility age for Medicare to age 60. We’re going to reduce the cost of prescription drugs and premiums. Joe says that we understand when we’re talking about healthcare, you got to know the body doesn’t just start from the neck down. It also requires healthcare from the neck up.

This is the choice we have in six days. On the other hand, you have Donald Trump. Who, together with his boy Bill Barr, are in the United States Supreme Court right now suing to get rid of the Affordable Care Act, in the midst of a pandemic that has killed hundreds of thousands of people over just the last several months. If they have their way, over 20 million people will lose coverage. And the benefits for people with preexisting conditions will be over. Let’s understand, part of what the Affordable Care Act did is it said, for women, free mammograms. For all people, free health screenings for cancer. And they want to get rid of that. There’s a very clear choice in this election. Not to mention what they did to just ram through a Supreme Court justice because of their agenda to get rid of the Affordable Care Act. I voted no. It was an illegitimate process.

And here’s the thing about where Donald Trump has been on the Affordable Care Act. You know, we’ve been witnessing the same thing. From the time Donald Trump was running for office through the time he’s been in office, he’s had this weird obsession with trying to get rid of whatever Barack Obama and Joe Biden created. Have you all noticed that? But we don’t need presidents with weird obsessions. I think it’s time for that to end. Do you agree?

We’re in the midst of an economic crisis that is being compared to the Great Depression. Here in Arizona,

And on the one hand, you have Joe Biden, who says, “You want to talk to me about how the economy is doing?  Well then you need to tell me, how are working people doing? How are working families doing?” Joe Biden, who says, “You want to deal with the economy, then one, we will not raise taxes on anyone making less than $400,000 a year.” We will also cut taxes for middle-class working people. We will make sure that no working family pays more than 7 percent of their income in childcare. We will have a $15,000 tax credit for first-time home buyers, understanding that is the way and access for most families to achieve economic health and well-being intergenerational. That’s how Joe Biden thinks about the economy. 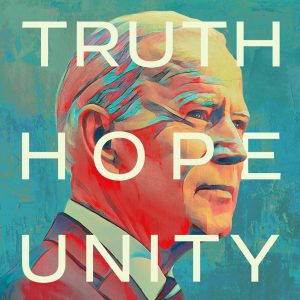 We’re in the midst of a crisis, which is the long-overdue reckoning on racial injustice in America. On that note, Joe Biden knows Americans’ history. He knows our history as a country. And he has the courage to speak the truth about it. Joe Biden has the ability to say “Black Lives Matter.” Donald Trump will never speak those words.

Joe Biden knows that we need to look at racial disparities in America. We need to understand Latinos and African-Americans have been three times more likely to contract COVID and twice as likely to die from it.

Joe Biden knows our indigenous brothers and sisters have the highest rate of diabetes population in America. Joe Biden says, “Pay attention to this and understand, a real leader will address the truth and speak the truth in a way that is about promoting equality and equity.”

On the other hand, you have:

There is a real choice in this election because you see, Joe Biden and I understand America deserves so much more. We want a leader who is not about trying to sow hate and division.

That’s the kind of leader Joe is.

The crises we are facing, and I don’t have to tell Arizona, include a climate crisis. The West Coast has been burning. These wildfires. You know, I’ve gone back. As you know, I’m from California. I’ve gone back. I have visited with families that have been evacuated, with firefighters who are fighting fires while their own homes are burning. My brother-in-law is a firefighter. I have seen the damage and destruction. Our Gulf Coast states’ damage and destruction because of the storms that have wiped out entire communities. In the Midwest, farmers have lost whole seasons of crops because of the floods.

Joe Biden says, “Let’s deal with this. Let’s face the facts. Let’s embrace science.” Let us do it with a sense of urgency and also understand we need to set time limits. Net-zero emissions by 2050. We need to set goals that include an investment in renewable energies. And guess what, that’s about jobs. Millions of jobs. 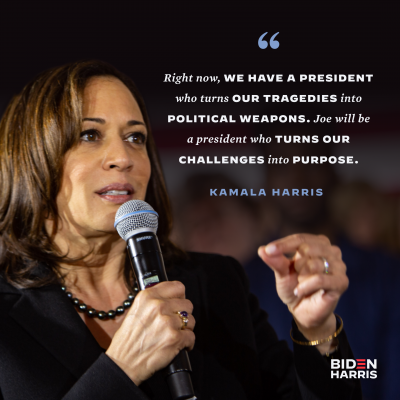 On the other hand, you’ve got Donald Trump. When asked about the wildfires, a reporter asked him that science is telling us that there’s a connection between these extreme weather conditions and those wildfires. Will you address that? And the president of the United States, in his utter eloquence says, science doesn’t know. The president of the United States referred to science as a person. We need a president who embraces fact and speaks the truth to the American people. And one who deals with what is one of the greatest threats to us as a species.

So, these are the threats, and these are the crises that we are dealing with right now. These are just some of them. And it brings me to what’s happening right now across America, a process that will end in six days. And that’s this election. And what we know is that everything, everything is in each of our hands, in terms of the power we possess through our vote and our action to determine who will be the next president of the United States.

Vote to honor your ancestors

People ask, they say, well, you know, does it matter if I vote? Why should I vote? And I’ll tell you, Tucson, I mention three things in response to that question. One, it’s important to vote to honor the ancestors—all those people who fought, who marched, for our right to vote. 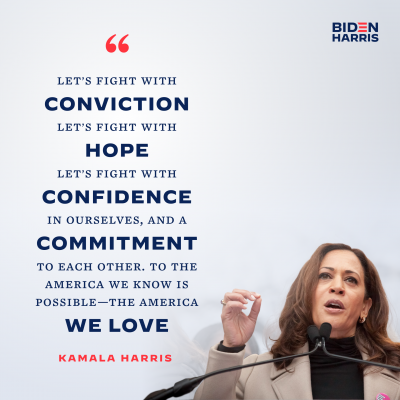 You go down the list. It’s everything that impacts you and your family and your neighborhood and your community and our country. From healthcare to if we’re going to support working families and working people, understanding that it is that kind of approach that has built the middle-class of America and made us strong when we’ve been strong. Everything is at stake. Whether we are going to have a country that embraces the fact that we are a nation built in large part by immigrants, and we must create a pathway to citizenship and honor America’s promise to our dreamers and renew DACA.

And it is this. So I’ve been traveling all over. I’ve been in Florida and Michigan and Ohio and Georgia and North Carolina. I was in Nevada yesterday. I’m here in Arizona today. I’m going to head to Texas. I have been all over.

And here’s the thing. You know, we have a long history of powerful folks trying to make it difficult for other folks to vote. And then in 2013, of course, the Supreme Court gutted the Voting Rights Act, and right after that, there were a couple of dozen states that put in place laws that made it difficult, laws that were purging the voter rolls. And we have people in powerful positions now, including the president of the United States at that first debate who took the stage in front of 70 million Americans and openly encouraged the suppression of the vote. People who are trying to make it confusing. “You got to fill out this envelope and put it in that envelope.” Places where you got to have then a perfect stranger sign, or somebody else sign your envelope. Places in our country that are pulling away drop boxes to make it difficult to vote, or shutting down polling sites.

And we have to ask, why are so many powerful people trying to make it difficult for us to vote? Why are they trying to confuse us? Why is the president messing with the post office? And here’s the answer. Because they know our power. They know our power. They know when we vote, things change. They know when we vote, we win. And so let’s not ever let anyone take our power from us. Ours is the power to use our voices. And at election time, that means our vote, and let’s not let anyone take it from us. Because here’s the thing. Our democracy is always going to be as strong as our willingness to fight for it. And so that is what we will do. And that means every one of us voting, talking to our friends, letting them know what’s at stake.

And then Tucson, my final point is this.

And we will tell them, and that’s how we elected Joe Biden the next president of the United States.

Thank you, Tucson. Thank you.

About the Author: Kamala Harris