If You Knew Betsy Devos…

To understand Betsy DeVos as Secretary of Education, it is helpful to know about her background and her agenda. Amazingly, it does not directly flow from her boss, Donald J. Trump.

Her life has been one of wealth through her own family and the one she married into.  Her father was a billionaire; her husband is a billionaire (her husband’s father started Amway).

Fun fact: her brother is Erik Prince of Blackwater notoriety; that’s the private security contracting firm accused of both overbilling and human rights abuses during the Iraq War. 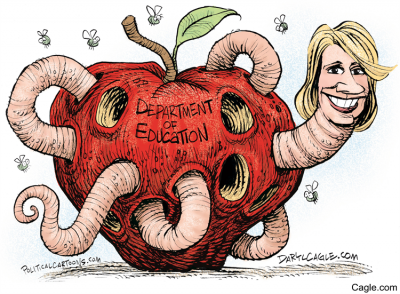 Key to understanding DeVos’ thinking on education are her deep roots to her church, the Christian Reformed Church, and its beliefs about society:

Many church members became staunch opponents of unions by the time New Deal-era legislation protected the right to strike and allowed for collective bargaining. They viewed it as socialist intrusions that diminished the authority of the church and contributed to bigger government.

In 2001, DeVos listed education activism and reform efforts as a means to “advance God’s Kingdom.”

Neither she nor her children went to any public schools, not K-12 nor college.

Oddly, in her official government biography, it is stated about her interest in education:

“(It) grew when she sent her own children to school and was confronted with the reality that not every child in America is granted an equal opportunity to receive a great education.

It’s perplexing how – if her children were in private school or being homeschooled – that DeVos could know much about what was happening in public schools.

She is hard-core GOP and has been for decades.

DeVos has spent decades in GOP leadership. She was the head of the Republican Party in Michigan and the Republican National Committeewoman for Michigan.

All told, the DeVoses have contributed at least $7 million to lawmakers and the Michigan state Republican Party in recent years. Their influence can be seen in just about every major piece of education-related legislation in Michigan since the 1990s.

While other far-right mega-donors may have become better known over the years (the Coorses and the Kochs, Sheldon Adelson and the Mercers), Michigan’s DeVos dynasty stands apart—for the duration, range, and depth of its influence. 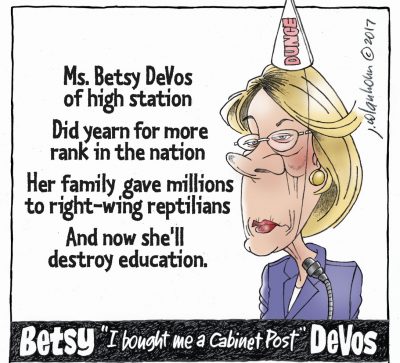 Her family has donated millions to different candidates, including George W. Bush. Interestingly, it does not appear she ever donated to Trump’s campaign.

In fact, here’s what DeVos herself had to say about political spending:

“My family is the largest single contributor of soft money to the national Republican Party. I have decided to stop taking offense at the suggestion that we are buying influence. Now I simply concede the point. They are right.”

Her philosophy on public education is that it shouldn’t really exist.

DeVos calls public schools “stagnant” and “failing.” She has stated that education is “a closed system, a closed industry, a closed market. It’s a monopoly, a dead end.”

Her belief is that education should be a private choice and therefore should be handled by the private sector. This, coupled with her hatred of unions, tells you all you need to know about the direction she wants for U.S. public education.

In a 2018 article in Vanity Fair, Samuel Abrams, director of Columbia University’s National Center for the Study of Privatization in Education explains:

“There is a method here—or, more precisely, a mission. DeVos has used her position as a “bully pulpit” to advance the belief that “society doesn’t exist; only individuals and families.” We accordingly should not be surprised that she has pushed for minimum standards at public school and cut funds for everything from career and technical education to teenage pregnancy prevention. For libertarians, she’s a godsend. For the rest of us, she’s a wrecking ball.”

For someone not personally participating in public education, she and her husband certainly made it their special interest in Michigan from the ’90s on.

The DeVos’ philanthropic record makes clear that they view choice and competition as the best mechanisms to improve America’s education system.

The couple has said that they are for public education in the sense that dollars should be spent but they are not for “government-run schools” aka public schools.

They love charter schools — but the record in Michigan?

Despite two decades of charter-school growth, the state’s overall academic progress has failed to keep pace with other states. Michigan ranks near the bottom for fourth- and eighth-grade math and fourth-grade reading on a nationally representative test, nicknamed the “Nation’s Report Card.” Notably, the state’s charter schools scored worse on that test than their traditional public-school counterparts, according to an analysis of federal data.

Her real push is the idea of vouchers – giving parents a sum of public dollars so they can go out and find the education they choose for their child.

The methodology towards implementing vouchers started in some states as grants for parents with disabled students.  But then the thought was if this is good for those students, why not ALL students?

Initially, in the 2016 presidential election, DeVos had been for Jeb Bush, who she knew thru his work on public education as governor of Florida.  She also gave money to Carly Fiorina and then finally landed on Marco Rubio. It seemed she wanted to support anyone but Donald Trump.

In March 2016, DeVos described Donald Trump as an “interloper” and said that he “does not represent the Republican Party.”

But it appears she and Trump had a come to Jesus moment, and she came around.

From the beginning, there was virtually no one who thought she was qualified to be Secretary of Education. Except Trump.

Her confirmation hearings were a near-disaster.

In becoming the 11th Secretary of Education, DeVos had a first – her confirmation was the first where the Vice-President had to vote to break a 50-50 tie.  Meaning several Republicans voted against her.

DeVos got very busy in her early years as Secretary.

“Survivors, victims of a lack of due process, and campus administrators have all told me that the current approach does a disservice to everyone involved.”

Survivors of sexual assault/harassment and many groups that serve them say the changes would make reporting at schools more difficult and more dangerous.

To know Betsy DeVos is to worry about the future of public education in our country.

About the Author: Melissa Westbrook

Melissa Westbrook has been a public education advocate for 20+ years and, for the last decade, wrote the widely-read blog, Seattle Schools Community Forum. She covered mostly Seattle Schools stories but, with public education getting a higher profile, then covered state and national issues including charter schools. She grew up in Douglas, graduated from the U of A, moved away for 40 years and now has moved back to Arizona.