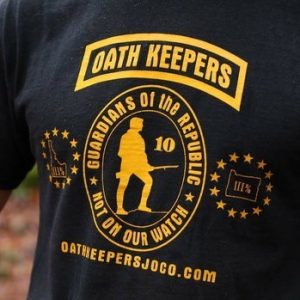 The ideology of the Oath Keepers most closely resembles that of the militia movement, whose adherents believe that the United States is collaborating with a one-world tyrannical conspiracy called the New World Order to strip Americans of their rights—starting with their right to keep and bear arms. Once Americans are rendered defenseless, the theory goes, they too will be enslaved by the New World Order.

The Oath Keepers aim much of their propaganda at military and police, reminding them that they swore an oath to defend the Constitution “from all enemies, foreign and domestic” and asking them to pledge to disobey unconstitutional orders they might get from superiors—orders that explicitly or implicitly refer to various militia-related conspiracy theories, such as mass gun confiscation or rounding up Americans to put them in concentration camps. Each theory relates to the notion that the United States government is falling under global governance and will at some point use police and military members to enforce the New World Order’s dominance. The Oath Keepers urge military and law enforcement personnel to step up to stop the conspirators.

Arizona Representative Mark Finchem called the white supremacist rally in Charlottesville a [QAnon] “Deep State” operation facilitated by the media and Democrats in a 2017 blog post on his campaign website.

And although his article was riddled with misleading and false information, for Finchem, the blog post is not out of character. The Republican legislator frequently traffics in ideas common on the far-right political fringe. He has described himself as a member of the Oath Keepers, an anti-government militia movement, and sponsored legislation that would allow Arizona to ignore U.S. Supreme Court rulings. 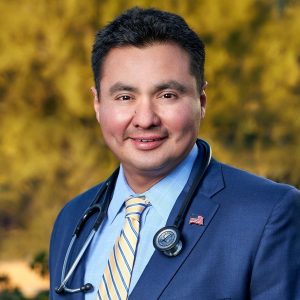 Vote instead for Democrat Dr. Felipe Perez MD, running for state representative in LD11. Find out more at Perez4arizona.com

In the August 15, 2017, blog post, Finchem denied that members of the American far-right were behind the violent “Unite the Right” rally, where one person was murdered and dozens injured by a neo-Nazi who rammed his car into a group of counterprotesters.

To support his argument, Finchem pointed to a story on a conservative news website, which stated that “Unite the Right” rally organizer Jason Kessler supported Obama and the Occupy Wall Street movement.

Although Kessler voted for Obama in 2008 and attended a 2011 Occupy protest in Charlottesville, his evolving political views on race and “white identity” during Obama’s second term brought him into the circle of the alt-right by the time Donald Trump won the presidency in 2016, according to the conspiracy-debunking website Snopes.

In his blog post, Finchem twice referred to Charlottesville as a PSYOP, a military term for “psychological operations” commonly used by conspiracy theorists.

“This is clearly a PSYOP to impugn those of us who stand for the rule of law and civil rights,” Finchem wrote. “Kessler’s fictitious association is more like a parasite barnacle on the side of a ship, useless and unwanted.”

“[This] has Deep State PSYOP written all over it,” Finchem wrote in another instance.

This article first appeared on the Blog for Arizona, Blogforarizona.net under the byline Arizona Blue Meanie.

Finchem is a former police officer and firefighter paramedic from Kalamazoo, Michigan, who now works as a realtor. A conservative Republican from Oro Valley, Finchem was first elected to represent District 11 at the Legislature in 2014.

His 2017 blog post on Charlottesville is not the first time Finchem has waded into feverish theories. Another article on his campaign website describes Obama as “taking every opportunity to install his ideological, totalitarian dictatorship.”

During his first campaign for the House of Representatives in 2014, Finchem told a local news outlet in a candidate Q&A that he is “an Oath Keeper committed to the exercise of limited, constitutional governance.”

On his Facebook page in September 2014, Finchem promoted an upcoming Tucson Oath Keepers event at a restaurant, where attendees would discuss the formation of teams in the Oath Keepers’ so-called Community Preparedness or Civilization Preservation Teams (CPT), with the goal of organizing militias for civil defense and survival during a disaster situation.

Finchem wrote, “This meeting will be to discuss how we will implement the CPT program in the Tucson, Green Valley and Nogales area and to find and identify Oath Keepers OR PROSPECTIVE Oath Keepers who have the requisite skills to help people get their communities better prepared for a time of crisis.”

These people would have skills useful in a disaster or “grid-down scenario,” Finchem wrote, including medical personnel, carpenters, and people skilled in communications or search-and-rescue.

“Are you active duty or retired military or law-enforcement?” Finchem wrote. “Your community needs you.”

The bio of his campaign Twitter account, which has been inactive since 2016, includes the line, “Protect State Sovereignty, Join Oath Keepers!”

Finchem did not answer detailed questions about his 2017 blog post on Charlottesville and his Oath Keeper membership.

This guy is nuttier than a jar of Planters mixed nuts. Yet if District 11 foolishly reelects him to the Arizona legislature, Finchem plans to challenge Rusty Bowers for House Speaker. Oh, HELL No! Then he is not just District 11’s problem, he is all of Arizona’s problem.