More Americans believe the Democratic Party (47%) than the Republican Party (39%) would do a better job of handling whatever issue they consider to be the most important problem facing the U.S. Americans’ preferences on this question in presidential election years have generally corresponded with the party that ultimately won the election.

In fact, in all but two presidential elections in Gallup records, the party leading on this measure has ended up winning the presidency. The exceptions were 1980 — when the parties were tied — and 1948 when Harry Truman scored a comeback victory after trailing in the polls most of the year. The question was not asked in 2000. 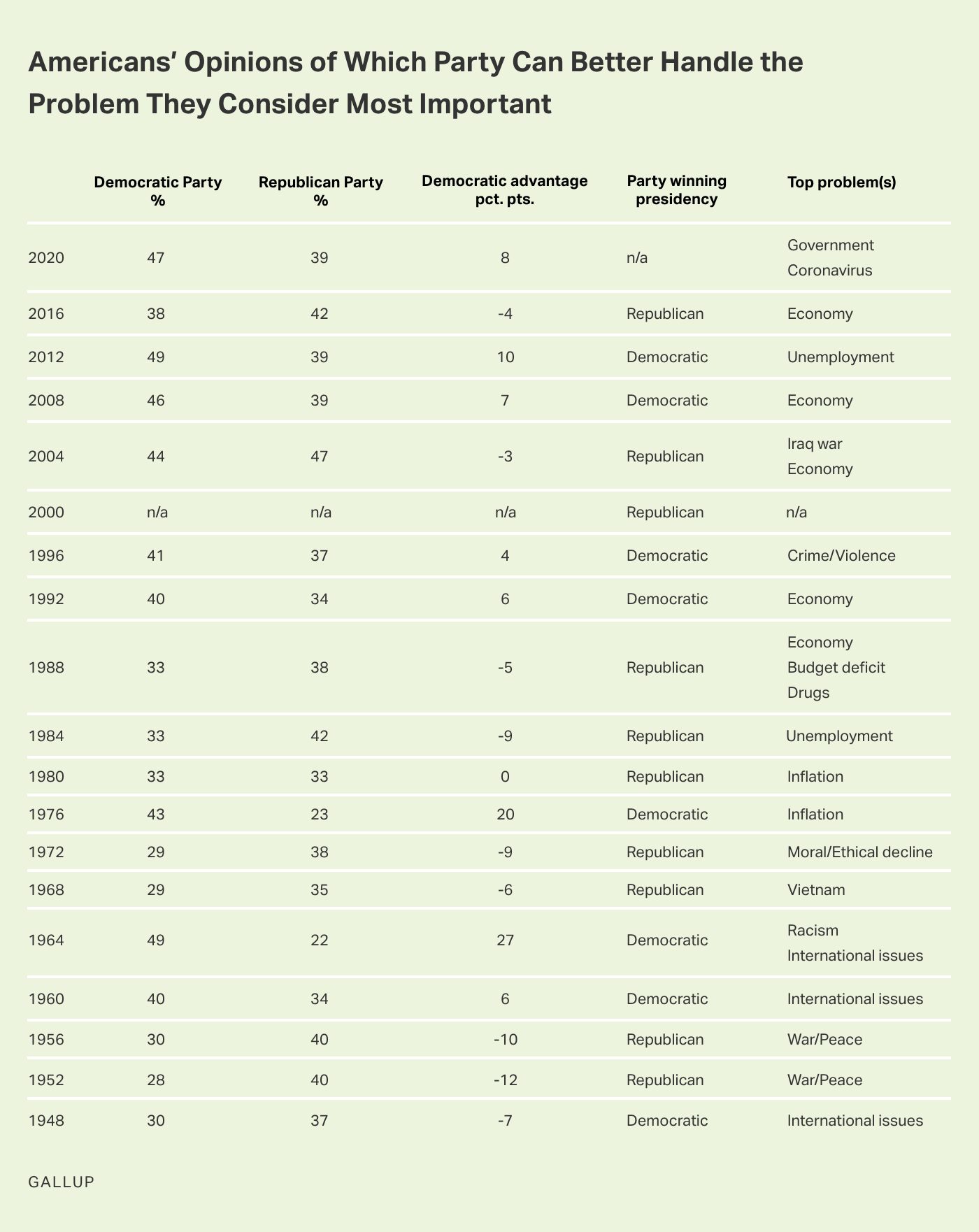 Because the percentages mentioning any problem are generally low, it is only possible to analyze perceptions of which party can best handle the top two issues named. Those who say the government is the most important problem are more inclined to say the Democratic Party (51%) than the Republican Party (44%) can best handle it. Among those naming the coronavirus, Democrats have a much wider lead, 62% to 21%.

As would be expected, regardless of what Republicans or Democrats name as the most important problem, they believe their party is better able to deal with it. Ninety-two percent of Republicans say the GOP is better able to handle the most important problem, and 95% of Democrats say the same about the Democratic Party. Independents tilt more heavily to the Democratic Party (42%) than the Republican Party (29%), with 30% not believing either party is better.

Economy Generally Not Viewed as a Problem

At a time when many businesses are closed or struggling because of coronavirus restrictions and Americans rate the economy more negatively than positively, a record-tying-low 9% of Americans mention some economic issue as the most important problem. This includes 5% mentioning the economy in general terms, 2% unemployment or jobs, and 2% income inequality.

The previous time 9% mentioned an economic issue also occurred during the pandemic, in July. The pre-pandemic low point occurred in January of this year, at 10%.

Gallup has computed “net economic mentions” on the “most important problem” question consistently since 1992. The high point was 86% in February 2009, which was after the financial crisis and toward the official end of the Great Recession. 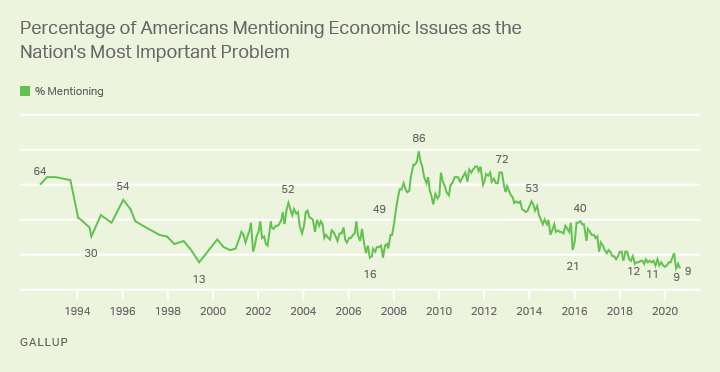 Nine percent of Americans mention an economic issue as the most important problem facing the U.S. This ties as the lowest reading in the trend. Economic mentions have been low in recent years and were also low in the late 1990s and early 2000s and in 2006 and 2007.

Americans’ perceptions of which party can handle whatever problem they think is most important have been a reliable indicator of the political climate in presidential election years. Democrats currently hold an eight-point advantage over Republicans on this measure less than two months before Election Day. With other key national mood indicators — such as presidential job approval and satisfaction with the way things are going — looking perilous for the incumbent Republican Party, a second term for President Donald Trump would rival Truman’s 1948 reelection as one of the bigger upsets in U.S. political history.

About the Author: Jeffrey Jones

Jeffrey M. Jones, Ph.D., has served as a Gallup Senior Editor since 2000, overseeing research and conducting analysis for Gallup's U.S. polling and other public release surveys. His research on public opinion and voting behavior has been published in academic journals and edited books.