Flipping the Legislature for the First Time in 50 Years: A Distinct Possibility

This article first appeared on the Blog for Arizona, http://blogforarizona.net/

My colleagues David Gordon and Clyde Steele have written extensively about State Senator Vince Leach’s autocratic governance compared with the Legislative District 11 Democratic challenger, JoAnna Mendoza, who is as salt-of-the-earth as Kamala Harris.

Mendoza is a Marine Corps veteran, a Redrock resident, and mother to a 4-year old son. She is one of the rising stars being endorsed by President Obama.

After money flooded Democratic state coffers on news of Ruth Bader Ginsberg’s death, “Republican and Democratic strategists believe that Democrats will win the state House while Republicans will retain control of the state Senate—though a full flip is certainly possible,” Politico reports.

A No-Show at His Debate

Leach declined to attend the September 30 Clean Elections debate. Perhaps he was trying to evade the growing number of angry constituents.

Questions the incumbent State Senator could have answered are:

The answers are festering on Leach’s right-wing website, showing how out-of-touch he is with voters. It’s all about the wall, guns galore, and helping insurance companies deny healthcare.

For example, Leach says, “Too many liberals in Congress want to hold our security hostage in exchange for amnesty. The federal government should first secure the border, then address the question of what to do about the illegal aliens in the country.

In other words, build the pointless border wall.

Regarding the 2nd Amendment, he says, “Arizona enjoys Constitutional Carry and is the most 2nd Amendment friendly state in the country. I say congratulations.” Leach’s loose-guns viewpoint enabled crazy people to shoot Congressman Gabby Giffords.

Regarding job creation, Leach says, “We have passed regulatory reform, tort reform, and tax reform, and it has had a great effect on our economy.” He doesn’t say that cutting regulations have cut consumer protections, tort reform has slashed the damages that people can recover in court against harmful acts by corporations, and that tax “reform” has simply created giveaways to big corporations.

On health care, Leach proves he doesn’t care about people with pre-existing conditions, saying, “We must continue to fight to repeal Obamacare and protect a free-market health care system.

“We need to allow for insurance to be…scaling back the number of coverages mandated by law.”

Women’s rights get short shrift when old, white man Leach says, “I am pro-life.” He says nothing about caring for the lives of new mothers or their children, who are often born into poverty. 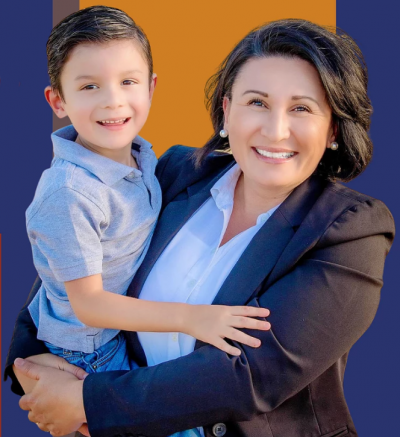 JoAnna Mendoza and her son.

In contrast, JoAnna Mendoza told Tucson.com that now, with the pandemic, parents face the difficulty of giving their children a high-quality virtual education.

A Zoom-based education is hardest on most elementary school children who need their teachers’ presence in order to learn.

To this end, Mendoza supports the Invest in Education ballot initiative that would pull in $940 million annually for K-12 public schools through an income tax surcharge to the wealthiest earners in the state.

When it comes to health care, Mendoza says it’s “a human right, and everyone should have access to affordable quality health care,” she told Tucson.com.

“… Before the pandemic, the state faced a major shortage of physicians and medical care professionals, and the consequences of this have gotten even worse with the growing number of folks needing medical attention due to COVID-19.”

“Mendoza describes herself as a retired Marine, mom, and native Arizonan who grew up in Elo.

“She worked alongside her family in cotton fields as a child in Pinal County and joined the Navy at age 17.

“After completing her service, she joined the Marines and was deployed on combat tours to Iraq and Afghanistan,” Tucson.com reports.

“Republicans are reckoning with signs that the party has taken on a direction that won’t play well in Arizona in 2020—or ever, Politico reports.

“With that, Democrats could cement control of state politics, as they have in other suburban-heavy states, like Colorado and Virginia.

“A win by Democratic Senate nominee Mark Kelly would put both of Arizona’s seats in Democratic hands after decades of GOP control.

“Turning both chambers would be a first for Democrats in more than 50 years,” Politico reports.