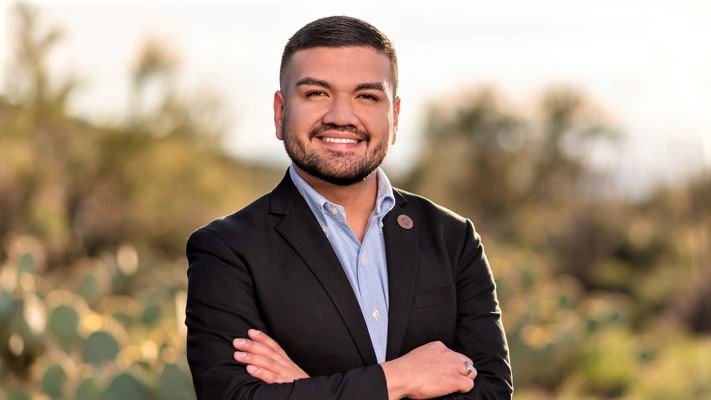 Rep. Andres Cano of LD3 on Legislative Action in 2021

Andres Cano, age 29, was elected to the state House for LD3 in 2018 and reelected in 2020. In the Legislature, he opposed Gov. Ducey’s proposed $1.5 billion flat income tax cut for the wealthy and filed state legislation to restore funding for community colleges. He voted against a bill that preempted cities from passing new energy regulations.

He recovered from Covid in November 2020 and has supported the expansion of access to healthcare.

He is a member of the House Natural Resources, Energy, and Water Committee and the Ways and Means Committee. He has served as a board member of Planned Parenthood Arizona, with the City Center for Collaborative Learning, and with Literacy Connects.

Andres is a Tucson resident. He earned a B.A. in broadcast journalism from Arizona State University in 2014 and studied at the Harvard Kennedy School Executive Education program. He was the director of the LGBTQ+ Alliance Fund. Before becoming a state representative, he worked for eight years as an aide to Pima County Supervisor Richard Elías.

Register in advance for this meeting:
https://us02web.zoom.us/meeting/register/tZ0lcO-vqTMjGdGPD-WF8Q-tcOJyLjgMOfYb

A sixth-generation Arizonan, Andrés began his public service at age 14 as a paid summer internship with Pima County. By age 16, Andrés was appointed as the Chairman of Arizona Governor’s Youth Commission by Governor Janet Napolitano.

Throughout college, Andrés interned in the district office of U.S Congressman Ed Pastor (D-AZ) and the Washington, D.C. office of U.S. Senator Mark Udall (D-CO.) He was elected President of the Young Democrats of Arizona in 2010.