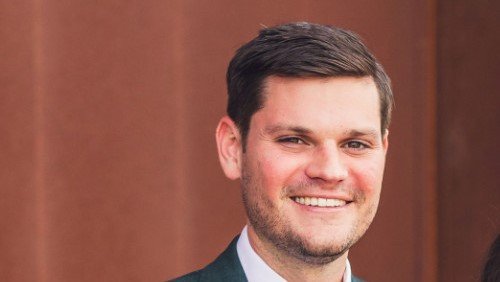 A native of Arizona and product of our public schools, Charlie Fisher has been the Executive Director of the Arizona Democratic Party since November 2020.

He has been active in local and state politics and advocacy since 2013. He started his career in environmental advocacy and worked at a Government Relations firm before moving into campaigns with now-Congressman Greg Stanton’s mayoral reelection and light rail expansion campaign in 2015. Since then he has managed a legislative campaign, worked for the Arizona Education Association, and fought to protect the Affordable Care Act with Children’s Action Alliance.

Born and raised in Scottsdale, Charlie is a lifelong Arizonan. After graduating from Saguaro High School and Whittier College in Southern California, he returned home and began a career in issue advocacy and electoral politics.

Charlie lives in Central Phoenix with his wife, Mel, and his dogs, Kona and Rue. He is a lifelong Arizona sports fan.

Register in advance for this meeting:
https://us02web.zoom.us/meeting/register/tZwtcOCrrz0uG9Mo4BGp38_aa_nTrlFr6xf3