Doctor: Improved Medicare for All will Fix Flaws in US Healthcare

The COVID-19 pandemic has exposed several shortcomings in the U.S. health care system:

Medicare is better than private insurance

The U.S. spends far more on health care than any other nation, but our life expectancy has fallen behind. We must use the lessons of this crisis to better prepare for the next one and address the shortcomings in our health care system. We would have been better able to manage acute and chronic health problems during the pandemic if the country had already adopted Improved Medicare for All.

Under traditional Medicare, patients can choose from a network that includes the vast majority of U.S. primary care physicians. Once adults are eligible for coverage, their age-specific mortality increases from the worst among 17 peer nations to one of the best. The multi-year gap in life expectancy between Black and white patients who require dialysis disappears when Medicare covers both groups. Medicare also does a much better job of controlling costs than private health insurance: During the past decade, Medicare’s cumulative increase in per-enrollee spending was 21.5%, far less than the 52.6% average increase among private insurers.

However, Medicare is not perfect. The reimbursement model for physicians is bewilderingly complex; high levels of patient cost-sharing can bankrupt older adults; and the benefit design has significant gaps (dentistry, pharmacy, optometry, and audiology, among others).

The Improved Medicare for All approach addresses each of these problems through a simple concept: fix the flaws in the current program, then provide it to all Americans. Improved Medicare for All would provide universal access to all medically necessary care. It would obviate the need to develop emergent funding strategies to cover screening, treatment, and prevention of a single viral infection, such as COVID-19, in uninsured and underinsured patients.

We can afford this plan through administrative savings. Medicare operates with less than 2% overhead, whereas private health insurers often operate with more than 12%. The complexity of billing multiple payers adds tens of thousands of dollars to medical office overhead, and it diverts time from patient care to administrative tasks. Hundreds of economists declared that the U.S. would come out ahead economically under Improved Medicare for All.

Compared with our peers in nine other countries, U.S. primary care physicians are far less satisfied with medical practice. A key driver of dissatisfaction is the moral indignity of knowing how to help a patient but facing insurmountable economic barriers. It breaks our hearts when a patient tells us, “I’ll pray and wait until I turn 65 and have Medicare.” Medical bankruptcy would be scandalous in any comparable nation. 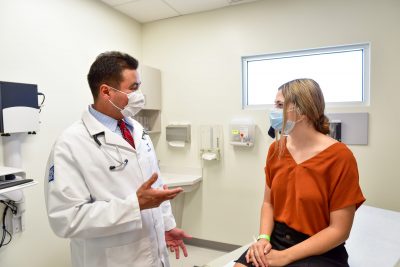 US physicians spend as little as 26% of their time with patients. In contrast, family physicians in Canada spend 79%.

Improved Medicare for All could help resolve the issue of excessive documentation. Electronic health records are one example of the unique administrative burdens of medical practice in the U.S. Adopting a single-payer system would mitigate two drivers of excessive documentation: complex requirements for maximal reimbursement and legal risk protection. If reimbursement requirements were more akin to global norms, physicians could document based on clinical — not economic — needs. If coverage of future medical care were guaranteed by law, patients would have fewer reasons to sue physicians.

Simplifying administrative burdens would allow more time for patient care. A 2016 study found that physicians spend as little as 26% of their time with patients. In contrast, family physicians in Canada spend 79% of their time on patient care, which could be why more of them report being satisfied with their practices.

In 2018, John Cullen, M.D., then-president of the American Academy of Family Physicians, described U.S. medical practice as “an incredible bureaucratic mess to get anything done for patients.” At the same time, Trina Larsen Soles, M.D., then-president of Doctors of British Columbia, said of the Canadian system, “It’s not a big hassle. I can focus on patient issues, not administrative issues.”

Although the political obstacles are formidable, we, as Democrats, need to urge our elected representatives to carry out our state party platform and sign on to the Medicare for All bill. This year, the bill will be introduced by Pramila Jayapal in the House and Bernie Sanders in the Senate. Then we need to urge President Biden to abandon his futile attempt to improve the ACA and endorse Medicare for All.

About the Author: Eve Shapiro

Dr. Eve Shapiro is a pediatrician practicing in Tucson, AZ, for more than 30 years. Since shortly after its founding, she has been a member of Physicians for a National Health Program, which works toward a health care system that is universal, equitable, and nonprofit. She has written many op-eds and letters to the editor and has organized her local community to support this vital work.