I’m a loyal Democrat who proudly flies the American Flag.

It’s time for Democrats to reclaim the American Flag as our symbol of democracy.

We all saw the dangerous mob that disrupted the US Senate from accepting the Electoral College vote. Armed goons took over the US Capitol by force — waving the American Flag as they tried to destroy democracy. Those right-wing anarchists have no right to use our flag.

On Inauguration Day, January 20, 2021, Democrats should proudly hoist their flags and demonstrate what it means to be a real American. We vote, we meet, and we rally to uphold the Constitution and the Declaration of Independence. Democrats throughout Pima County, Arizona, and the US are called on to fly American flags on the day Joe Biden and Kamala Harris are inaugurated – January 20, 2021.

Take a picture and send it to me.

I vividly remember reciting the Pledge of Allegiance as a child: “I pledge allegiance to the flag of the United States of America, and to the republic for which it stands, one nation under God, indivisible, with liberty and justice for all.” 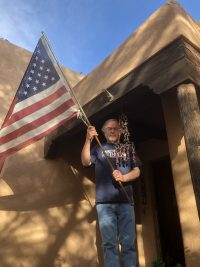 Don Klein with his American Flag

Growing up, we had neighborhood parades on the Fourth of July, and I proudly led the parade holding an American Flag.

At public events I heartily sing our national anthem:

Whose broad stripes and bright stars, through the perilous fight,
O’er the ramparts we watched, were so gallantly streaming!
And the rockets’ red glare, the bombs bursting in air,
Gave proof through the night that our flag was still there.

“History says, don’t hope on this side of the grave.

But then, once in a lifetime the longed-for tidal wave

Of justice can rise up, and hope and history rhyme.”