Biden expands his lead over Trump to 10-point margin

Americans give President Trump negative ratings for his handling of the coronavirus pandemic, and as the crisis has persisted his prospects for reelection in November have eroded, with former vice president Joe Biden now holding a clear lead nationally, according to a Washington Post-ABC News poll.

Overall, Americans offer mixed assessments of Trump and Biden, and although the presumptive Democratic nominee is viewed less favorably overall today than he was last fall, he fares better than the president on several personal attributes. At the same time, Trump’s supporters are notably more enthusiastic and committed to voting for him in the fall than are those who currently back Biden. 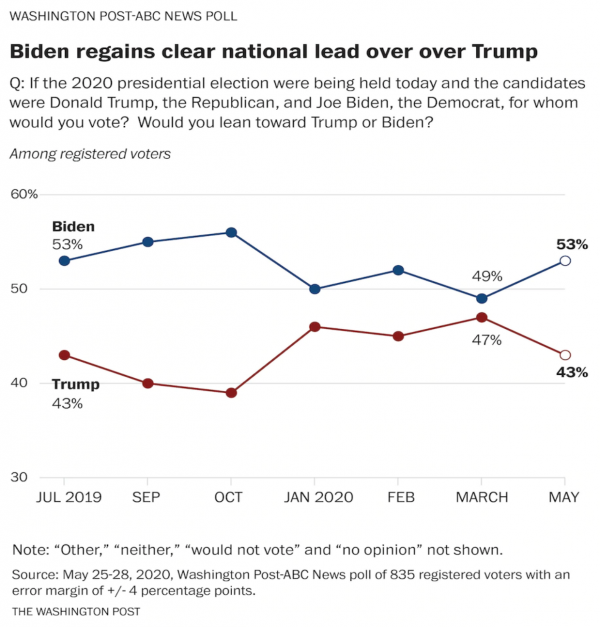 Biden leads Trump 53 percent to 43 percent among registered voters nationally. That 10 percentage-point margin compares with what was a virtual dead heat between the two candidates two months ago, when Biden was at 49 percent and Trump 47 percent. Among all adults, Biden’s margin widens to 13 points (53 percent to 40 percent).

Against a rapidly changing backdrop — with the coronavirus far from contained, the prospects for the economy remaining rocky as many businesses begin to reopen and violence convulsing cities across the nation — the poll captures the moment. But it is not predictive as to the political fallout and implications for November, especially given the possible disparity between the popular vote and the electoral college results as was the case in 2016.