Arizona Legislature Should Expel Insurrectionist — as Oregon Just Did 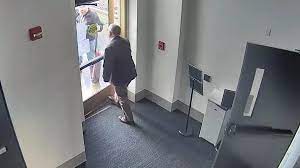 Oregan Republican Rep. Mike Nearman opens a door to let rioters into the Capitol on January 6.

The Oregon State Legislature, in a bipartisan 59 to 1 vote, just voted to expel one of its members for helping to plan an armed attack on that state’s capitol.

The only person voting against the measure was Mike Nearman, the state legislator accused of helping to orchestrate the attack.

Travel to Arizona and the State Legislature here can not get its act together in a bipartisan way to expel Legislative District (LD) 11, Representative Mark Finchem, even as more video evidence surfaces that he was closer to the January 6, 2021, Domestic Terrorist Insurrectionist Attack on the Nations Capitol than he admitted.

Please click on the video below to see for yourself.

Finchem is so confident that nothing can touch him that he has the gall to run for Arizona Secretary of State. Joined by state Sen. Wendy Rogers (R-LD6), has continued to spew conspiracy venom in support of the Maricopa County audit sham, and to attack Attorney General Merrick Garland for declaring that these fringe undertakings will not be allowed to circumvent the Democratic voting process.

Just look at these tweets from Finchem and Rogers.

These guys are a clown show – they want to intrude in an area that is exclusively state’s jurisdiction to manage. They couldn’t be bothered when we called on them for action before the audit. (1/4) https://t.co/3y3M5zGC74

If Attorney General Merrick Garland thinks he has a right to our ballots and machines he should go to court. If he uses force when multiple courts have already authorized this audit he will be in violation of the law. Lawless thugs is all they will be!

Rogers and Finchem are false patriots. They are, as Samuel Johnson said, scoundrels. They live in an alternative fringe reality and have done nothing but advance baseless conspiracy theories that have been proven wrong, again and again, and again.

If the members of the former Party of Lincoln are truly the law and order party they pretend to be, then they should have no problem expelling accused insurrectionist Finchem who is masquerading as a patriot.

If Oregon Legislators can expel one of their own in a bipartisan fashion to someone whose plot never materialized, why is it so difficult for Arizona Republicans to do it when the attack did happen and the evidence is there for all to see?

Shun Finchem and Rogers too. Consign them to the political abyss where they belong and do not let them near any appointed or elected public office position again.