Appeals Court: No 2nd Amendment Right to Carry a Gun in Public

Striking a blow for gun safety, the 9th Circuit US Court of Appeals ruled that the Second Amendment does not provide a right to carry a gun, concealed or openly, in public. The court reviewed more than 700 years of English and American legal history that gives the government the power to regulate arms in public.

“The Second Amendment does not guarantee an unfettered, general right to openly carry arms in public for individual self-defense,” the 9th Circuit ruled. “Accordingly, Hawai‘i’s firearms-carry scheme is lawful.”

The 11-judge court upheld a Hawaii state law that requires a license to carry a gun, concealed or unconcealed. The law exempts police officers and on-duty armed forces and permits hunters and target shooters to carry openly to transport their arms.

But everyone else must apply for a permit from the sheriff or a judge after showing that the applicant is “suitable . . . to be so licensed,” upon meeting a citizenship and age requirement and showing a “good reason to fear an injury to his person or property, or . . . other proper reason for carrying a pistol or revolver.”

Simply saying that a person wants a gun for general “self-defense” is not enough. The case is Young v. Hawaii, decided on March 24. The decision applies to Alaska, Arizona, California, Hawaii, Idaho, Montana, Nevada, Oregon, and Washington.

Bitter defeat for the gun lobby

The ruling was a bitter defeat for a Gun Owners Committee, a Rifle Association, a Firearms Coalition, and the Second Amendment Foundation. The ruling is 215 pages long and involved 80 attorneys, including gun safety groups like Everytown for Gun Safety, Giffords Law Center to Prevent Gun Violence, and state attorneys general from across the country.

Arizona, meanwhile, allows anyone 18 or older to openly carry firearms in most places. During the 2020 election, armed protesters outside Maricopa County’s tabulating center put a spotlight on Arizona’s open carry practice. Illogically, the state legislature now wants to make it legal to bring loaded guns to schools and government buildings. 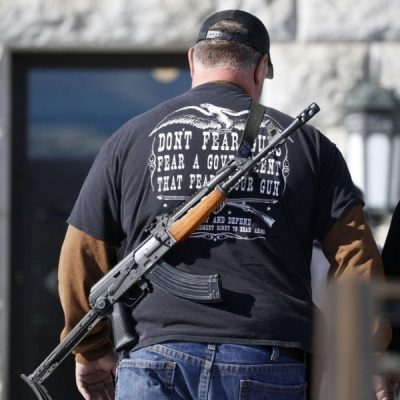 In 2020, gun violence killed nearly 20,000 Americans. In the January 6 attack on the US Capitol, arrested rioters had guns and bombs.

In any case, the 9th circuit ruled that the government has the power to regulate arms in the public square. “The overwhelming evidence from the states’ constitutions and statutes, the cases, and the commentaries confirms that we have never assumed that individuals have an unfettered right to carry weapons in public spaces.”

This month, 18 people were killed in senseless mass shootings in Colorado and Georgia. 2020 was a record-breaking year for gun-related deaths in the US. In 2020, gun violence killed nearly 20,000 Americans, according to data from the Gun Violence Archive, more than any other year in at least two decades.

The White House said on March 26 that President Biden is prepared to issue executive orders to enact gun reform, circumventing the need for a divided Congress to pass legislation. Meanwhile, Democrats in Congress are demanding action on gun safety as Republicans obstinately oppose it.

The U.S. Supreme Court on March 26 discussed taking up a major new gun rights case involving an NRA-backed challenge to a New York state law that restricts the ability of residents to carry concealed handguns in public.

The 2008 Supreme Court decision in District of Columbia v. Heller, found that the pre-existing right to keep and bear arms is not a right to “carry any weapon whatsoever in any manner whatsoever and for whatever purpose,” according to the 9th Circuit.

US colonists first adopted an English law enacted in 1328 to ban pistols, revolvers, and hand-held weapons in public. Formal licensing of firearms spread in the 20th century. “The government must have the power to determine whether and how arms may be carried in public places,” the 9th Circuit said. There is no right to carry arms openly in public; nor is any such right within the scope of the Second Amendment.”