As the session drags on, things are getting weirder at our state legislature. A few examples:

1) On the same day, in what felt like the biggest “I’m not a racist” flex ever, Michelle Udall (R-25) sponsored a surprise amendment to fine teachers $5,000 for discussing “controversial” issues like racism in the classroom, and also bucked her party’s leadership to advance in-state tuition for “Dreamers” (undocumented youth).

2) When the PEVL purge bill failed the Senate last month, Kelly Townsend (R-16) said she voted against it because she wouldn’t support any voting rights attacks until the Senate’s so-called “audit” concluded. They’re nowhere near done with the “audit,” but SB1485 has been scheduled for its final Senate vote on Monday. If it passes, it will advance to the governor’s desk to be signed into law. Is President Fann (R-1) calling Townsend’s bluff? Or have they reached a deal behind the scenes?

3) But wait, there’s more! Lawmakers are also holding a Senate Health Committee hearing (yes, two months after committees ended, with special permission from President Fann). They plan to hear a pair of strikers, one of which will revive some form of the sex-ed bill the governor vetoed last month. 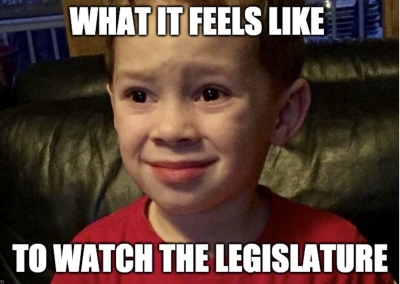 You may be asking: WHAT CAN I DO?

Alert #1: Say No to the Culture Wars

Last week, House lawmakers decided it would be a good idea to subject Arizona teachers to a $5,000 fine if they allow classroom discussions on “controversial” topics such as racism, or fail to give equal weight to both sides of “divisive” issues. They attached a last-minute amendment to SB1532 and passed it the same day, without any public input. 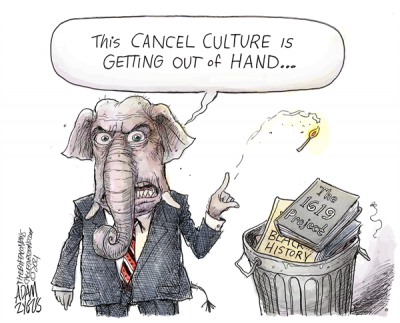 Though it was sprung on us without warning, it’s clearly a copycat bill — the language is similar to bills from Arkansas, Texas, Idaho, Tennessee, and Florida. It’s so broadly written that teachers could be forced to present a positive spin on issues from climate change and slavery to 9/11 and the Holocaust. And, unsurprisingly, it’s getting national attention. As this Forbes article points out, “It’s hard to estimate just how chilling this bill would be for classroom teaching. How do you function as a responsible educator when the law requires you to teach things you know are wrong?”

The amendment’s sponsor says SB1532 is needed because “kids are being taught things some people don’t believe are true.” But teachers shouldn’t have to give equal time to “opposing views” on slavery, 9/11, and the Holocaust to escape a $5,000 fine. And we shouldn’t be discouraging students from discussing current events at a time when the difficulties in our society can only be resolved by them learning more about these topics. It’s shameful that our lawmakers are forcing “culture wars” legislation on us instead of dealing with the real issues facing Arizona now — unemployment, health care, education funding, water rights and so much more.

SB1532 now heads back to the Senate for a final read. Contact your senator to OPPOSE.

It seems voter suppression is the unpopular issue that just will not die. We’ve killed the PEVL purge bill twice this year so far, but on Monday, it’s coming back for a third try. 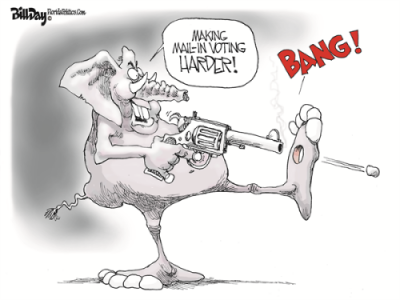 Last month, in a surprise shift, Kelly Townsend (R-16) voted down SB1485, saying she wouldn’t support any voting rights attacks until the conclusion of the Senate’s so-called “audit.” The bill’s sponsor used a procedural move called “reconsideration” to allow it to be brought back.

SB1485 is bad news. Opponents estimate it would purge over 225,000 voters from the Permanent Early Voting List, disproportionately affecting the thousands of Arizonans who received their ballot in the mail but chose to vote in person. It also disproportionately affects independent voters; if they fail to mail back their early ballots for two general elections in a row, and if they do not specifically request ballots for the partisan primaries, they risk getting kicked off the PEVL.

Our senators need to hear from their constituents. Contact your senator to OPPOSE.

Alert #3: Yet Another Sex Ed Striker to Fight

Two months after the committee hearing deadline, the Senate is holding a special committee hearing with permission from the Senate President, complete with a pair of strikers on the agenda. The text won’t be available until Tuesday at 5 PM, but we do have the short titles; one of them is “parental rights; sex education instruction.” That means it could be similar to SB1456, which would have been the most restrictive sex-ed law in the nation. That bill banned sex-ed and AIDS instruction before 5th grade and banned discussing gender identity and expression without parental consent. It passed both chambers along party lines before being vetoed by the governor for being “overly broad and vague.”

Comprehensive sex ed covers anatomy, peer pressure, body changes, relationships, and safety, all crucial to helping children survive in a world where adults prey on them. Abstinence-only programs not only don’t prepare young people for life — they don’t work. And despite what they say, the bill’s backers don’t have our kids’ best interest in mind — SB1456 originated from a Scottsdale-based anti-LGBTQ hate group.

Ducey said he supported the underlying intent of that bill, so there is a real danger a new form could pass. RTS is available for this bill! Use your comments to say you oppose the striker. Get loud! OPPOSE.

On the Governor’s Desk

Gov. Ducey needs to hear from us! The highest-impact contact is the phone at 602-542-4331. Also use Twitter if you have an account — tweeting .@dougducey gets under his skin.

SB1105, sponsored by JD Mesnard (R-17), would increase the summary printed atop ballot measures such as citizen’s initiatives from 100 to 200 words. Legal challenges to the 100-word summaries, calling the descriptions “misleading,” have become a favorite tool that dark-money special interests use to scour the ballot free of topics they don’t like. This type of challenge succeeded in 2018 with Invest in Ed — and failed with the 2020 marijuana initiative when the judge noted that a 100-word summary “can’t be expected to encompass everything.” At best, adding an extra 100 words will make petitions more crowded, leaving less room for signatures. At worst, it bolsters the efforts of groups like Goldwater and the Chamber of Commerce to steer politics in Arizona with their seemingly limitless funds. On Governor’s desk as of 5/3. OPPOSE.

HB2462, sponsored by Kevin Payne (R-21), would force people to take extensive training (at least 80 hours) before serving on civilian review boards. The added cost and time commitment of this requirement would shut out the communities most affected by police misconduct and would likely preclude many Arizonans from serving. The Arizona Police Association helped craft the bill. On the governor’s desk 5/3. OPPOSE.

These bills are headed for a vote of the full House or Senate. You cannot use RTS here. Contact your representatives for Senate bills (SB) and your senator for House bills (HB). If you’re certain your lawmakers will already oppose, send them a quick email note of thanks, then contact the Senate President or House Speaker to ask them to halt the bill’s progress.

SB1485, sponsored by Michelle Ugenti-Rita (R-23), would strip voters from the Permanent Early Voting List if they fail to vote their early ballots in two back-to-back primary and general elections, and strikes the word “permanent” from the statute. Opponents estimate this would purge over 225,000 voters from PEVL and affect the thousands of Arizonans who received their ballot in the mail but chose to vote in person. If independent voters fail to mail back a ballot for two general elections in a row and do not specifically request primary ballots, they risk getting kicked off the PEVL, which may be unconstitutional. Failed Senate final read last month with Townsend voting no, but back on reconsideration. OPPOSE.

SCR1044, sponsored by Paul Boyer (R-20), asks voters to make students who attended high school in Arizona for 2 years before graduating eligible for in-state tuition regardless of their immigration status. Making education affordable for these students is not only the right thing to do, but furthers the investment our state has already made in helping them become productive members of the high-skills workforce. SUPPORT.

HB2395, sponsored by Jennifer Longdon (D-24), would make it illegal for people to park their vehicles such that they block the sidewalk. These intrusions on pedestrian space don’t just rudely place dangerous moving cars in a space that should be safe for children. They can structurally damage sidewalks that aren’t meant to bear the weight of multi-ton cars and trucks, and create access issues for people who use wheelchairs or walkers or push strollers. Passed the Senate, where it was amended to ban private driveways and exempt loading/unloading. Still better than nothing. Scheduled for House final read. SUPPORT.

HB2035, sponsored by Jeff Weninger (R-17), is now subject to a striker with the short title “parental rights; sex education instruction.” The striker text won’t be available until Tuesday at 5 PM, but it could be similar to SB1456, which passed both chambers on party lines before being vetoed by the governor for being “overly broad and vague.” Scheduled for Senate Health Committee, Thursday. RTS is available! OPPOSE.

Keep using Arizona’s Request to Speak system and contacting your legislators. Reps always say they listen more to individual citizens than lobbyists, so we must work to keep up the pressure until the legislative session ends.

If you value the Weekly and want to support it, please consider donating to support our work. (Donation page is hosted by Indivisible.) 100% of your donations go to the research, development, and publication of this resource.

About the Author: Melinda Iyer

Melinda Merkel Iyer created the AZ Legislature Weekly Update, a condensed, easy-to-follow weekly overview that highlights the most notable bills of each session. Often called “the Iyer Report” or “the Weekly,” Melinda’s report describes each bill in brief everyday language and details its status for the week. She recommends a stance for each bill, and cites multiple sources of information so readers can make up their own minds.