11 Seditious Arizona Legislators Who Should Be Removed

It is time to get specific about seditious acts by Republican members of Arizona’s delegation in Congress and the Arizona Legislature. 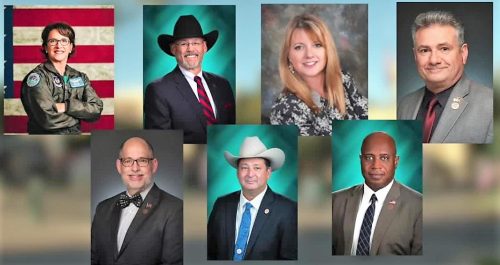 On January 6, the Republican U.S. representatives took part in an utterly pointless and certainly seditious effort to block the acceptance of Arizona’s and Pennsylvania’s certified slates of Electors and their votes. The Arizona vote in the House of Representatives took place as the U.S. Capitol was attacked by a mob of violent protestors instigated by none other than the United States president.

Representatives Biggs and Lesko are also guilty of earlier activity when in December they joined more than 130 other members to sign the amicus brief to the Supreme Court on behalf of the ridiculous Texas lawsuit to invalidate the presidential election results in Arizona and four other states.

It is absurd to believe that these four representatives were acting in the best interests of their constituents or acting in accordance with the Constitution and statutes of the United States. Signing on to the amicus brief and voting to disregard our electoral votes were acts supporting sedition and an unlawful overturning of the outcome of the presidential election.

Their actions show a misplaced loyalty to a discredited and untruthful president using illegal and desperate means to protect his grip on his office.

The issue, therefore, is what should be done about this behavior.

Should we wait for the House of Representatives to issue sanctions under their rules of conduct? The House has to consider how to sanction the similar behavior of 143 or so other members, all Republicans, and including the Minority Leader, the Minority Whip, and a number of ranking minority members of House committees.

It is doubtful if the Republican caucus has the appetite for sanctioning their own. Sufficient grounds exist for expulsion of more than a quarter of the members of the House. But I doubt that the Republican leadership has the stomach for taking this step. Some alternative halfway measures may be taken — such as not giving any of these people committee assignments, and denying them admittance to any committee meetings. Withholding resources such as staff budgets and office space limitations could also be done.

The question for us is what could and should the State of Arizona do to show the State’s disapproval of this behavior? I suggest we cannot wait for two years to “let the people decide.” If they cannot be recalled in a prompt special election, what can be done now and who can do it? I would love to hear the thoughts of a constitutional lawyer – in addition to those of our Attorney General.

“We’re calling to expel them based on the behavior that they exhibited and the catastrophes that occurred yesterday at the U.S. Capitol,” said Jenny Guzman with Progress Arizona. “At the very least they should hold them accountable by reprimanding them from their chairmanship positions.”